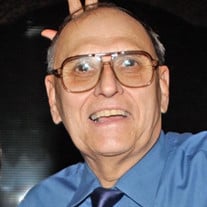 William Louis “Bill” Hilyerd passed away September 28, 2018, at his home in Henderson, Kentucky. He was 77 years old. Bill was born on January 11, 1941, in Louisville, Kentucky, to William George and Catherine Hess Hilyerd. He was a graduate of Butler High School and the United Electronics Institute. He joined the United States Army Reserves in 1965 and served until 1971, attaining the rank of Specialist 4th Class. While working as a cameraman for an educational television station in 1965, he saw Barbara Westerfield in a hallway at a school where the station was recoding a program. He and Barbara were married on August 12, 1967 and remained together until her death. They moved to Henderson in 1967 and raised one son. Bill worked as an engineer for WEHT from 1967 until 1977, then moved to WNIN for two years. He left WNIN to work for the Owensboro cable company for several years before returning to WNIN. In 1986, he moved to WEVV where he worked for over twenty years until his retirement. After the death of his first wife, he met Barbara Raber Reich and they were married November 7, 2010. Bill was also an avid amateur radio operator. He obtained his amateur radio license in 1956 at the age of sixteen. Over the rest of his life, he obtained verified contacts with over 63,000 other amateur radio operators in over 360 countries. He was a member of the Tri-State Amateur Radio Society and wrote a column for their newsletter for many years. He was preceded in death by his first wife, Barbara Westerfield Hilyerd. He is survived by his second wife, Barbara Raber-Reich Hilyerd, his son William A. “Will” Hilyerd, his daughter-in-law Cynthia Hilyerd, and his grandson, Eric Hilyerd. Bill’s Life Celebration will be from 4:00 p.m. until 8:00 p.m. on Tuesday, October 2, 2018, and from 9:00 a.m. until the service time on Wednesday, October 3, 2018, at Benton-Glunt Funeral Home in Henderson, Kentucky. The funeral service will be held at 10:00 a.m. on Wednesday at the funeral home with Reverend Michael Erwin officiating. Burial will follow at Roselawn Memorial Gardens in Henderson, Kentucky. Pallbearers will be Ken Morgan, Tim Raber, Bob Bock, Ron Cavins, Tony Johnson, Tim Sievers, Josh Case, and Monty Hall. Honorary Pallbearers will be Andy Mosier, Sr., Sarah Flach, Terry White, Marcia Morgan, Jeff Hueber, John Snider, Jerri Orr, and Allan Mears. Expressions of sympathy may take the form of contributions to Christ Church United Church of Christ Building Fund, 3601 Washington Ave., Evansville, Indiana 47714. Arrangements entrusted to Benton-Glunt Funeral Home, A Life Celebration® Home, online condolences may be made at www.bentonglunt.com.

The family of William Louis "Bill" Hilyerd created this Life Tributes page to make it easy to share your memories.

Send flowers to the Hilyerd family.