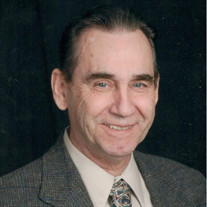 William Leonard “Bill” Heppler, age 83, of Henderson, KY, passed away at 7:15 a.m. Sunday. March 31, 2019 at Lucy Smith King Care Center under the care of St. Anthony’s Hospice surrounded by his loving family. Bill was born on the family farm in Reed area on September 10th, 1935. He was born into a farm family, and he started his career early by milking cows, driving mules to till the soil, and any other chore that needed to be done. He wanted to be part of the action of the farm life. During his adult hood he farmed in Henderson County, Union County, and Lebanon County, Pennsylvania. Bill also had an oil business and a logging business in Sturgis, Kentucky. He enjoyed being with his family, and the only sporting event he enjoyed was horse racing. He was proud of the fact that he met many celebrities during the years he attended the Kentucky Derby. Bill was preceded in death by his parents, Leonard and Josephine Bennett Heppler. Survivors include: Wife of 65 years: Sue Mattingly Heppler of Henderson, KY 2 Sons: Jerry Heppler and his wife Bobbie Sue of Sturgis, KY and Tim Heppler and his wife Mary Kay of Sturgis, KY Grandchildren: Emily Dominguez and her husband Jesse, Matthew Heppler and his wife Summer, Nathan Heppler and his wife Meredith, and Jerrad Heppler. Great Grandchildren: Ava, Micah, Noah, and Mariah Dominguez, Colby, Cale, and Cort Heppler, and Caroline Heppler. Brothers: Harry Heppler and Galen Heppler Sister: Jo Marilyn Adkisson There will be no services. A private burial will be held at a later date. Expressions of sympathy may take the form of contributions to St. Anthony’s Hospice, 2410 S. Green St., Henderson, KY 42420 or Reed Community Church, c/o Nancy Phillips, 20750 Hwy 811, Reed, KY 42451. Arrangements entrusted to Benton-Glunt Funeral Home, A Life Celebration® Home, online condolences may be made at www.bentonglunt.com

The family of William Leonard "Bill" Heppler created this Life Tributes page to make it easy to share your memories.

Send flowers to the Heppler family.