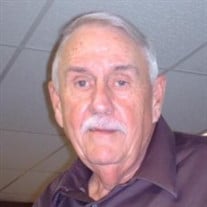 William D. “Billy” Risley, age 76, went home to be with the Lord on Wednesday, August 5, 2020 at 1:20 P.M. Billy was under the care of St. Anthony’s Hospice at his home. He was preceded in death by his parents: James and Charlotte Risley, 3 sons: Jerry Reynolds, Jeff Risley, Perry Risley, a brother Doris Risley and a sister Betty Bingermer. Billy was born in Hebbardsville, Ky and lived in the rural setting that he loved all his life. He was an outdoorsman and enjoyed rabbit hunting with family members and friends. He introduced the boys in the family to hunting at an early age. His daughter cherishes her memories of playing basketball in the front yard of their home. A dirt court took the place of grass, but no one seemed to care. He met friends two days a week to play basketball at various locations well into his late 40’s. Billy was a member of Fairview Baptist Church and enjoyed singing during Sunday services. Survivors include his wife of 49 years Donna Yancy Risley; 1 daughter Angie Baxter (Tony) of Hebbardsville, KY; 4 bonus daughters: Melanie Griffin, Trena Lee, Sandy Bland, Missy Todd; daughter in law Candy Risley of Hebbardsville, KY; 2 sisters Vickie Wallace of Henderson, KY and Nancy Patton, Sevierville, TN; 3 grandchildren: Dustin Risley (Suzy Taylor), Wm. Zachary Risley (Amanda), Victoria Goodman (Ben); 10 great grandchildren and multiple bonus grandchildren. Relatives and friends are invited to Billy’s Celebration of Life at his daughter’s home in Hebbardsville at 6497 Mason Landing Road on Saturday, August 8, 2020. Friends may gather from 1:00-3:00 p.m. and a Going Home Service will be held at 3:00 p.m. with Rev’s Dan Book and Randy Duncan officiating. A private burial will be held at a later date in Bethel Cemetery, Hebbardsville, KY. Expressions of sympathy may take the form of contributions to St. Anthony’s Hospice, 2410 South Green Street, Henderson, Kentucky 42420 Arrangements entrusted to Benton-Glunt & Tapp Funeral Home, A Life Celebration® Home, online condolences may be made at www.bentongluntandtappfuneralhome.com.

The family of William D. "Billy" Risley created this Life Tributes page to make it easy to share your memories.

Send flowers to the Risley family.