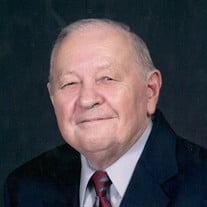 William “Bill” Curtis Evans, age 89, of Henderson, KY, passed away at 5:20 p.m., Thursday, September 27, 2018, at Methodist Hospital in Henderson. Bill was preceded in death by his parents, Arthur and Zelma Evans, and a brother, Donald Lee Evans. Bill married Wilma Minton in 1962 and together they raised 2 daughters. He was a member of Bennett Memorial United Methodist Church for many years. Bill retired from Brake Supply Company in Evansville, IN as a machinist. He enjoyed watching U.K. basketball, going to the Great Smokey Mountains, and loved listening to gospel music. Most of all Bill cherished the time he spent with his grandbabies. Bill is survived by his wife of 55 years Wilma Evans of Henderson, KY, daughters Carla Taylor of Henderson, KY and Sandra Jean Proctor and her husband David of Henderson, KY, his sister Peggy Ann Vest and her husband Gordon of Henderson, KY, 3 grandchildren: Carlene Williams and her husband Ronnie of Henderson, KY, Eric Evans of Louisville, KY, and Matthew Taylor of Uniontown, KY, 7 great grandchildren and 8 great-great grandchildren. Relatives and friends are invited to Bill’s Life Celebration from 2:00 until 8:00 p.m. Sunday and again on Monday starting at 12:00 p.m. at Benton-Glunt Funeral Home. The funeral service will be held at 2:00 p.m. on Monday, October 1, 2018 at the funeral home with Brother Jeff Lambert officiating. Burial will follow at Roselawn Memorial Gardens in Henderson, KY. Expressions of sympathy may take the form of contributions to Bennett Memorial United Methodist Church, 503 Letcher St, Henderson, KY 42420. Arrangements entrusted to Benton-Glunt Funeral Home, A Life Celebration® Home, online condolences may be made at www.bentonglunt.com

The family of William "Bill" Curtis Evans created this Life Tributes page to make it easy to share your memories.

Send flowers to the Evans family.