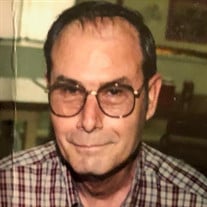 W. Darrell Gardner, age 77, of Henderson, KY, passed away at 6:05 p.m. Monday, February 11, 2019 at his daughter’s home under the care of his children. Darrell grew up, one of 10 children, on a farm in Dixon, KY. He worked at Whirlpool in production for 45 years. He was a member of the former Audubon Baptist Church and attended services at Airline Baptist Church as well. Darrell was a homebody at heart but also loved to go on road trips with his wife Ruth Ann. He enjoyed hunting and fishing. Darrell’s favorite way to spend his time was simply being with his grandchildren. In addition to his parents, Frank and Bessie Gardner, Darrell was preceded in death by his wife Ruth Ann Gardner, brothers Paul and David Gardner, and sisters Carolyn Slemp and Reva Shoulders. Darrell is survived by his daughters Janet Ziegler and her husband Timothy of Henderson, KY and Cheryl Gray and her husband Chris of Corydon, KY; sons Bill Gardner and his wife Becky of Henderson, KY and Scott Gardner and his wife Sharon of Henderson, KY; sister Theresa Ann Gardner of Owensboro, KY; 4 brothers: Jerry Gardner of Mission Viejo, CA, Roger Gardner of Plant City, FL, Malcom Gardner of Owensboro, KY, and Terry Gardner and his wife Susan of Louisville, KY; 14 grandchildren, 15 great grandchildren, and many nieces and nephews. Relatives and friends are invited to Darrell’s Life Celebration from 4:00 until 8:00 p.m. Thursday and again on Friday starting at 9:00 a.m. at Benton-Glunt Funeral Home. The funeral service will be held at 10:00 a.m. on Friday, February 15, 2019 at the funeral home with Reverend Jeff Burke officiating. Burial will follow at Roselawn Memorial Gardens in Henderson, KY. Expressions of sympathy may take the form of contributions to American Cancer Society, P.O. Box 22478, Oklahoma City, OK 73123. Arrangements entrusted to Benton-Glunt Funeral Home, A Life Celebration® Home, online condolences may be made at www.bentonglunt.com

The family of W. Darrell Gardner created this Life Tributes page to make it easy to share your memories.

Send flowers to the Gardner family.