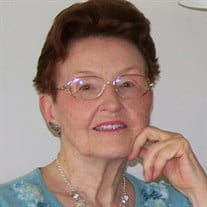 The Rev. Martha Ann Powell McKown of Henderson died Tuesday, April 23 at home. The daughter of John William Powell and Dora Ellen (Melton) Powell, she was born May 29, 1933 into a farm family of five brothers and two sisters near Dixie, Kentucky. She enjoyed the farm life, especially the animals, and loved horseback riding. A large, close-knit wider family was hers once she counted and found she had about seventy first cousins. After graduating Corydon High School and the University of Evansville, she then attended Boston University, where she earned the master’s degree of Religious Education. Martha early felt God's call to be a minister, but frustrated by the then Methodist prohibition on ordaining women, she became a Director of Religious Education. Ordination later became possible, but she continued to devote her time to training others in religious education, and to her minister husband Leslie McKown, and to their two daughters, Karen and Liana. She also worked at two churches in Terre Haute. Finally, in 1979, she completed two more years of school at Christian Theology Seminary, was ordained, and became the pastor of United Methodist churches in Indianapolis, Princeton (Indiana), Poseyville, and Evansville. After retirement she and Leslie worked part-time on staff at First United Methodist Church in Henderson. She was president of the Church Federation of Terre Haute and of the Princeton Ministerial Association, a member of the Board of Ordained Ministry, and many other church and community offices. She is honored at the Henderson Women's Honor Court. Also a poet and author, Martha wrote and published several books for children, a worship drama titled “Palm Sunday Parade”, and a collection of poems called “Wilderness Voices”, and many magazine articles and curriculum guides. She was a serious student of the life and theology of John Wesley, the intellectual and spiritual father of Methodism, serving as president of the South Indiana United Methodist Historical Society. Other interests included flower and vegetable gardening, and genealogy. A log cabin and wooded acreage in Brown County, Indiana was a place to get away from some of the pressures of life and enjoy the company of family and friends. Martha enjoyed travel, both in the United States and in other parts of the world, including India, Nepal, Central and South America, the United Kingdom, and Europe. She and her husband Leslie lived two years in Panama. Martha loved and enjoyed her husband of 61 years, Leslie McKown, their two children, Karen Marie McKown-Arano and Liana Jane Edenfield (Patrick) six grandchildren, nine great-grandchildren and one great-great-grandson. Two sisters, Waleska Westerman and Edna Westerman, and a brother, the Rev. M. E. Powell, survive. Relatives and friends are invited to Martha’s visitation from 4:00 until 8:00 p.m. Friday and again from 10:00 a.m. until the service time on Saturday, April 27, 2019 at Benton-Glunt Funeral Home in Henderson, KY. The funeral service will be held on Saturday at 1:00 p.m. at the funeral home with Reverend Jim Wofford officiating. Burial will follow at Shady Grove Cemetery in Poole, KY. Expressions of sympathy may take the form of contributions to First United Methodist Church, 338 3rd St, Henderson, KY 42420. Arrangements entrusted to Benton-Glunt Funeral Home, A Life Celebration® Home, online condolences may be made at www.bentonglunt.com

The Rev. Martha Ann Powell McKown of Henderson died Tuesday, April 23 at home. The daughter of John William Powell and Dora Ellen (Melton) Powell, she was born May 29, 1933 into a farm family of five brothers and two sisters near Dixie, Kentucky.... View Obituary & Service Information

The family of The Rev. Martha Ann Powell McKown created this Life Tributes page to make it easy to share your memories.

Send flowers to the McKown family.