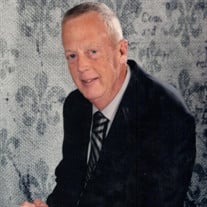 Terrye Gower, age 69, of Henderson, KY, passed away on Tuesday, February 8, 2022 at the Lucy Smith King Care Center under the care of St. Anthony’s Hospice. Terrye was a pharmacist and owned and operated Barry’s Pharmacy for many years. He liked to play the piano and go fishing. He was an excellent poker player and an amazing cook. Terrye enjoyed traveling and going on cruises. He was a member of Zion Baptist Church and taught Sunday school. Terrye was a diehard UK fan - as any alumnus should be. Terrye was preceded in death by his parents Hildred and Ruth Gower, his sister Freida Pryor, and his brother Allan Gower. Terrye is survived by his wife of 22 years Cheryl Gower of Henderson, KY; 2 daughters Kayleigh Gower of Evansville, IN and Kesley Gower and her fiancé Collin Powers of Spottsville, KY; 3 sons: Justin Gower and his wife Kendall of Henderson, KY, Nathan Gower and his wife Rochelle of Campbellsville, KY, and Brandon Gower of Henderson, KY; 2 step-sons Sean Haner of Louisville, KY and Kris Haner and his wife Abbie of Newburgh, IN; 16 grandchildren: Lyndon, Lawson, Harlow, Ariana, Elin, Avelyn, Finn, Everly, Haiden, Kennedy, Thad, Mckenna, Albany, Rosabell, Penelope, and Hudson; and 1 niece and 3 nephews. Relatives and friends are invited to Terrye’s Life Celebration from 11:00 a.m. until the service time on Saturday, February 12, 2022 at Benton-Glunt & Tapp Funeral Home. The funeral service will be held at 1:00 p.m. on Saturday at the funeral home. Expressions of sympathy may take the form of contributions to The Gideons International, P.O. Box 1163, Henderson, KY, 42420. Arrangements entrusted to Benton-Glunt & Tapp Funeral Home, A Life Celebration® Home, online condolences may be made at www.bentongluntandtappfuneralhome.com.

Terrye Gower, age 69, of Henderson, KY, passed away on Tuesday, February 8, 2022 at the Lucy Smith King Care Center under the care of St. Anthony&#8217;s Hospice. Terrye was a pharmacist and owned and operated Barry&#8217;s Pharmacy for many... View Obituary & Service Information

The family of Terrye Gower created this Life Tributes page to make it easy to share your memories.

Send flowers to the Gower family.