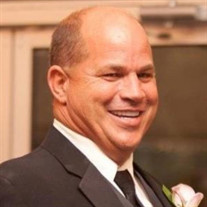 Terry Peckenpaugh, age 63, of Henderson, KY, passed away on Thursday, March 31, 2022 under the care of St. Anthony’s Hospice. Terry was owner and operator of Peckenpaugh Logging for more than 25 years. He was a 1977 HCHS graduate and quarterback for the Henderson County Colonels. After the City and County High School merger, Terry led the Colonels to the 4AA State Football Championship game as runner-up against Louisville Trinity. Terry was also a member of the HCHS Baseball Team. He attended Georgetown College and Western Kentucky University. Terry refereed in many capacities which included high school, Evansville Otters, college basketball, football, and baseball. He also refereed many other minor league baseball games. He was part-owner of thoroughbred horses in the racing industry and also President of the K.H.S.A.A. Football Officials Organization for many years. He was passionate about the Louisville Cardinals, both in football and basketball. Terry loved his husky Bandit and his lab Sadie. He enjoyed mowing his lawn and had a heart of gold. Terry was able to capture the hearts of many with his infectious smile. Terry was preceded in death by his parents William and Irene Peckenpaugh. He is survived by his daughter Lauren Waldroup and her husband Drew of Westfield, IN; sons Alexander Peckenpaugh and Payton Peckenpaugh both of Henderson, KY; sister Rebecca Carroll and her husband John of Henderson, KY; brother Leo Peckenpaugh and his wife Marietta of Henderson, KY; grandchildren: Hadley, Maren, and Hagen Waldroup; and nieces and nephews. Relatives and friends are invited to Terry’s Life Celebration from 4:00 pm to 8:00 pm Friday and again on Saturday at 9:00 am until service time at Benton-Glunt and Tapp Funeral Home. The memorial service will be held at 11:00 am Saturday, April 9th, 2022 with Father Rich Martindale officiating. Burial will follow at Roselawn Memorial Gardens in Henderson, Kentucky. Expressions of sympathy may take the form of contributions to: St. Anthony’s Hospice – Lucy Smith King Care Center, 2410 S. Green St., Henderson, KY 42420 and/or Alexander Peckenpaugh or Payton Peckenpaugh Scholarship Fund at Field and Main Bank, 140 North Main Street , Henderson Kentucky 42420. venmo: @peckenpaughscholarship Arrangements entrusted to Benton-Glunt & Tapp Funeral Home, A Life Celebration® Home, online condolences may be made at www.bentongluntandtappfuneralhome.com.

Terry Peckenpaugh, age 63, of Henderson, KY, passed away on Thursday, March 31, 2022 under the care of St. Anthony&#8217;s Hospice. Terry was owner and operator of Peckenpaugh Logging for more than 25 years. He was a 1977 HCHS graduate and... View Obituary & Service Information

The family of Terry Peckenpaugh created this Life Tributes page to make it easy to share your memories.

Terry Peckenpaugh, age 63, of Henderson, KY, passed away on Thursday,...

Send flowers to the Peckenpaugh family.