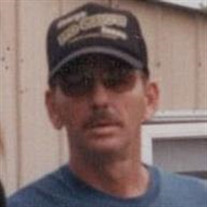 Steven “Pete” Daniel Kurtz, age 61, of Henderson, KY, passed away at 10:12 a.m., Saturday, June 2, 2018, at his home under the care of St. Anthony’s Hospice. Steven was preceded in death by his brother, Oscar Kurtz, sister, Mary Kurtz Embry, and an infant granddaughter, Kennedy. Steven was born to George and Sally Kurtz in 1956. He was proud of his service as a United States Army Reserve National Guardsman. After his service, he spent time on a chicken farm in California then an orange orchard in Florida before coming back home to Kentucky. He had a number of different jobs before finding true contentment as a coal miner. Steven worked for 5 Star Mining in Prosperity Mine in Petersburg, Indiana until his health prevented him from working. He was a member of the Loyal Order of Moose #338, and the YMCA. Steven loved to fish, hunt, and go camping at Kentucky Lake. He was married to the love of his life, Vickie, aka “Seventh from Heaven” for 21 years. Survivors include: wife, Vickie A. Kurtz of Henderson, KY; 3 daughters: Daphne Michelle James, and her husband Jason, of Sturgis, KY, Lee Ann Vowels of Evansville, IN, Tara Nicole Wright of Henderson, KY; son, Daniel Lee Vowels and his wife Jamie, of Dale, IN; 2 sisters: Martha Sue Glenn, of Henderson, KY, and Marilyn Diane Kurtz, Morganfiled, KY, 15 grandchildren, nieces and nephews. Relatives and friends are invited to Steven’s Life Celebration from 1:00 until 7:00 p.m. Thursday and again on Friday starting at 9:00 a.m. at Benton-Glunt Funeral Home. The funeral service will be held at 11:00 a.m., Friday, June 8, 2018 at the funeral home with Brother Ronnie Gibson and Brother Randy Vanover officiating. Burial will follow at Fernwood Cemetery in Henderson, KY. Full military honors will be rendered by the American Legion Worsham Post #40. Expressions of sympathy may be made in the form of contributions to Pancreatic Cancer Research, http://pancreatic.org. Arrangements entrusted to Benton-Glunt Funeral Home, A Life Celebration® Home, online condolences may be made at www.bentonglunt.com

The family of Steven "Pete" Daniel Kurtz created this Life Tributes page to make it easy to share your memories.

Send flowers to the Kurtz family.