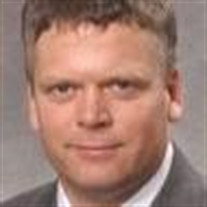 Stephen “Steve” Marshall Corum, age 54, of Henderson, KY, passed away at 3:47 p.m., Wednesday, November 27, 2019 at Deaconess Gateway Hospital in Newburgh, IN. Steve had a bachelor’s degree in finance economics from the University of Southern Indiana. He attended Ivy Tech Community College in Evansville and was an insurance agent at Shelter Insurance Company in Henderson. Steve previously owned Payne’s Gym and was a talented powerlifter. At that time he was also the Ky Chair member of the U.S.A.P.L. Powerlifting Association. Steve was a devoted husband to the love of his life and his greatest pride and joy were his 10 children whom he was very devoted to. Steve is preceded in death by his parents Marshall and Jane Corum. He is survived by his wife of 20 years Lindsay Corum; 3 daughters: Gabrielle, Eden and Gracelyn Corum; 7 sons: Alexander, Zachary, Noah, Jacob, Seth, Eli, and Samuel Corum; 1 sister Susan Dixon; 1 brother Michael Corum; and 1 niece Leah Risley and her husband Neal and 1 nephew Jonathan Dixon and his wife Shanda all of Henderson, KY. Relatives and friends are invited to Steve’s Life Celebration from 2:00 until 8:00 p.m. on Monday and again on Tuesday from 12:00 p.m. until the service time at Benton-Glunt Funeral Home. The funeral service will be held at 2:00 p.m. on Tuesday, December 3, 2019 at the funeral home with Brother Ed Russ officiating. Burial will follow in Roselawn Memorial Gardens in Henderson, KY. Expressions of sympathy may take the form of contributions to the GoFund me account set up for the family in memory of Stephen Corum. Arrangements entrusted to Benton-Glunt Funeral Home, A Life Celebration® Home, online condolences may be made at www.bentonglunt.com.

The family of Stephen "Steve" Marshall Corum created this Life Tributes page to make it easy to share your memories.

Send flowers to the Corum family.