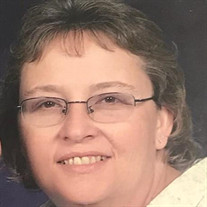 Sandy G. Tompkins, age 61, of Henderson, KY, passed away on Friday, September 10, 2021 at her home under the care of St. Anthony’s Hospice. In addition to her parents William and Mary Helen Kortz, Sandy was preceded in death by her sister Karen Marshall. Sandy was a member of Henderson’s First Baptist Church for many years. She worked at Atlantis Plastics and in most recent years she was head custodian at Thelma B. Johnson Early Learning Center. Sandy was an avid sports fan, especially baseball, football, and golf. She is survived by her husband of 30 years John M. Tompkins of Henderson, KY; sons Clayton West Dotson of Henderson, KY and Devin Earl Tompkins of Madisonville, KY; daughter Tracy Ann Johnson of Henderson, KY; 4 sisters: Cindy Jean Kinkade of Lebanon Junction, KY, Marilyn Sue Williams of Robards, KY, Janet Ann Swearingen of Henderson, KY, and Angela Marie Rhea of North Augusta, S.C.; brother Mike Kortz of Henderson, KY; 2 grandchildren Madeleine Johnson and Caden Dotson; and nieces and nephews. Relatives and friends are invited to Sandy’s Life Celebration from 5:00 until 8:00 p.m. on Monday and on Tuesday from 9:00 a.m. until the service time at Benton-Glunt & Tapp Funeral Home. The funeral service will be held at 10:00 a.m. on Tuesday, September 14, 2021 at the funeral home with Reverend Philip G. Johnson officiating. Burial will follow at Roselawn Memorial Gardens in Henderson, KY. Expressions of sympathy may take the form of contributions to Henderson’s First Baptist Church, 307 Center St., Henderson, KY, 42420. The family would like to extend a special thank you to the staff of St. Anthony’s Hospice. Arrangements entrusted to Benton-Glunt & Tapp Funeral Home, A Life Celebration® Home, online condolences may be made at www.bentongluntandtappfuneralhome.com

Sandy G. Tompkins, age 61, of Henderson, KY, passed away on Friday, September 10, 2021 at her home under the care of St. Anthony&#8217;s Hospice. In addition to her parents William and Mary Helen Kortz, Sandy was preceded in death by her... View Obituary & Service Information

The family of Sandy G. Tompkins created this Life Tributes page to make it easy to share your memories.

Send flowers to the Tompkins family.