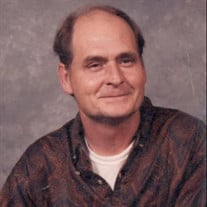 Russell Walters, age 79, of Henderson, KY, passed away at 9:50 a.m. on Wednesday, September 15, 2021 at the Lucy Smith King Care Center under the care of St. Anthony&#8217;s Hospice. He was preceded in death his parents Russell and Alma Walters,... View Obituary & Service Information

The family of Russell Walters created this Life Tributes page to make it easy to share your memories.

Send flowers to the Walters family.