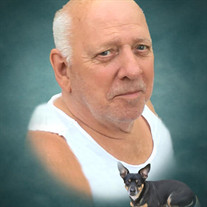 Ronald Edward Slaughter, age 78, formerly of Henderson, KY, passed away at 5:11 a.m., Thursday, June 17, 2021, at his home in Indianapolis, IN. Ronnie was preceded in death by his parents, Martin and Ruby Slaughter; two brothers, Kenneth and Martin E. Slaughter, Jr; sister-in-law, Judy Slaughter; and nephew, Jeffrey Slaughter. Ronnie was a generous and loving person who was always found to be steady and constant. He always had something to say and could keep everyone in the room laughing. He was a former member of Holy Name of Jesus Catholic Church in Henderson, KY and a current member of Christ the King in Indianapolis, IN. Ronnie was an avid bowler. He won countless trophies and consistently bowled a perfect game. Ronnie was a long-term United States Air Force service veteran. He later worked at Ft. Benjamin Harrison in Lawrence, IN, as a retired paid officer assisting widows with veteran connected benefits. Ronnie was a fan of the Indianapolis Colts and the Notre Dame Fighting Irish. He took great pride in his yard where he had a goldfish pond in his flower gardens. Ronnie was very passionate about dogs and enjoyed anything to do with them, including watching any and all shows about them, but he especially loved his dog Andy. He is survived by sisters: Joyce Hutchinson (Don) of Zion, KY, Janice Slaughter of Henderson, KY, and Joan Slaughter (Barry Barnes) of Henderson, KY; brother, Richard “T-Bone” Slaughter; his best friend of 45 years Karl Nowling; nieces: Heather Hughes (Ryan), Jenny Hutchinson Sellars (Christopher), Becky Powell (Robbie), and Audrey Slaughter (Katherine); nephew, Brian Hutchinson (Stefanie); great nieces Rachael Hutchinson and Natalie Hutchinson; great nephews: Cody Powell, Jaden Powell, Parker Powell, Easton Hutchinson Sellars, and Hadon Hughes. A private funeral service will be held with Father Gary Clark officiating. Burial with follow at Fernwood Cemetery in Henderson, KY. Military honors will be rendered by the American Legion Worsham Post #40. Expressions of sympathy may take the form of contributions to Henderson County Humane Society, 203 Drury Lane, Henderson, KY 42420. Arrangements entrusted to Benton-Glunt & Tapp Funeral Home, A Life Celebration® Home, online condolences may be made at www.bentongluntandtappfuneralhome.com

Ronald Edward Slaughter, age 78, formerly of Henderson, KY, passed away at 5:11 a.m., Thursday, June 17, 2021, at his home in Indianapolis, IN. Ronnie was preceded in death by his parents, Martin and Ruby Slaughter; two brothers, Kenneth and... View Obituary & Service Information

The family of Ronald Edward Slaughter created this Life Tributes page to make it easy to share your memories.

Send flowers to the Slaughter family.