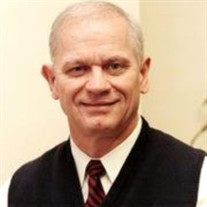 Rodger P. Bird, age 76, of Henderson, KY, passed away at 4:50 a.m., Saturday, May 16, 2020, at the Lucy Smith King Care Center. Rodger grew up in Corbin, KY and was the youngest of the legendary “Bird Brothers” who played football and basketball for the University of Kentucky. At the University of Kentucky, Rodger was a two-time All-SEC tailback and first team All-American tailback in 1965. He was a first-round draft pick of the Oakland Raiders, was the 1966 AFL Defensive Rookie of the Year and played in Super Bowl II. When his playing career ended, Rodger made Henderson his home. He was a member of First Christian Church and owner of Henderson Insurance Services. Rodger was preceded in death by his parents, Rubin and Bonnie Bird; brothers Jerry, Calvin and Billy Bird; and sister, Shirly Hall. He is survived by his wife of 53 years, Sally Bird; daughter, Sue Anne Mueller and her husband, Kris, of Louisville, KY; son Paul Bird and his wife, Beth, of Henderson, KY; sister, Nancy Carroll, and her husband, Rudy, of Corbin, KY; and 7 grandchildren. Due to COVID-19, no public memorial will be held at this time. Expressions of sympathy may take the form of contributions to First Christian Church, 830 S. Green St., Henderson, KY 42420 or St. Anthony’s Hospice, 2410 S. Green St., Henderson, KY 42420. Arrangements entrusted to Benton-Glunt & Tapp Funeral Home, A Life Celebration® Home, online condolences may be made at www.bentongluntandtappfuneralhome.com.

The family of Rodger P. Bird created this Life Tributes page to make it easy to share your memories.

Send flowers to the Bird family.