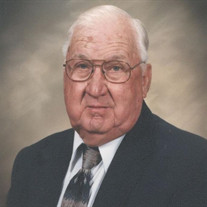 Robert James Bennett, Jr., age 90, of Henderson, KY, passed away Thursday, January 24, 2019 at his home under the care of St. Anthony’s Hospice. Robert was one of six children born to Robert and Garnett Bennett. He grew up in Zion and went to Hebbardsville High School. After high school he served our country in the United States Army. When his service was complete, he met and married the love of his life Miss Virginia Estelle Boswell. He was a truck driver for more than 30 years and was a member of Teamsters Local #135. Robert loved to travel and would share his experiences with his family every chance he got. He could be on the road all week for work, but as soon as he got home, could load his family into the station wagon and head out all over again. In his retirement, Robert worked with many local car dealerships as a transporter. He was a longtime member of Zion Baptist Church and a Kentucky Colonel. For more than 40 years, Robert and Virginia would host the family for a day of fun, fellowship, and burgoo cooking. To sum it all up, in his daughter’s words, “He was a giant of a man”. In addition to his parents, Robert was preceded in death by his son Robert L. Bennett, a brother Paul Bennett, and a sister Mary Kries. Robert is survived by his wife of 69 years Virginia Bennett, 3 daughters: Nancy Mills (Terry) of Owensboro, KY, Rebecca “Becky” Jones of Owensboro, KY, Patricia Walker (Ray Hill) of Santa Maria, CA; 2 sisters Mildred Connaway of Henderson, KY and Martha Cline (Bob) of Bowling Green, KY; 1 brother Harry Bennett (Sug) of Zion, KY; 4 grandchildren: Virginia Hudson (Critt), Audra Jones (Phillip), Jessica Williams (Drew), Pierce Walker; and 4 great grandchildren: Grace Hudson, Rawlin and Sawyer Williams, and Lucy Jones. Relatives and friends are invited to Robert’s Life Celebration from 1:00 until 5:00 p.m. Sunday, January 27, 2019 and again on Monday starting at 10:00 a.m. at Benton-Glunt Funeral Home. The funeral service will be held at 11:00 a.m. on Monday at the funeral home with Pastor Rick O’Daniel and Brother Dan Garland officiating. Burial will follow at Fairmont Cemetery in Henderson, KY. Full military honors will be rendered by the American Legion Worsham Post #40. Expressions of sympathy may take the form of contributions to St. Anthony’s Hospice, 2410 S. Green St., Henderson, KY 42420. Arrangements entrusted to Benton-Glunt Funeral Home, A Life Celebration® Home, online condolences may be made at www.bentonglunt.com

Robert James Bennett, Jr., age 90, of Henderson, KY, passed away Thursday, January 24, 2019 at his home under the care of St. Anthony&#8217;s Hospice. Robert was one of six children born to Robert and Garnett Bennett. He grew up in Zion and... View Obituary & Service Information

The family of Robert James Bennett created this Life Tributes page to make it easy to share your memories.

Send flowers to the Bennett family.