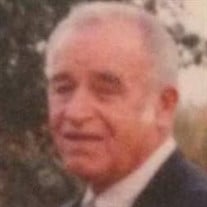 Richard Lee Jackson, age 81, of Corydon, KY, passed away at 7:00 a.m., Tuesday, July 24, 2018 in Evansville, Indiana. Richard was preceded in death by his parents, Lee Jackson and Carrie Deyss, sister, DeLois Hayden, brother, Ronald F. Jackson, Sr. Richard was a racing enthusiast and drove sprint cars for more than 40 years. It was his family’s legacy; he followed in his father’s footsteps, alongside his brother, and uncles, ultimately sharing the legacy with his own sons. Richard raced competitively in many states including Ohio, Michigan, Kentucky, Illinois, and Pennsylvania, but his racing home was the Tri-State Speedway in Haubstadt, Indiana. In addition to racing, Richard was involved in fabrication, repair, and design. He painted the renowned Spirit of Indiana. In 1980 he became paralyzed in an accident not affiliated with his racing career. He was determined to continue racing and he continued winning after being paralyzed. Richard was a longtime member of the H.A.R.C. (Hoosier Auto Racing Club) and as well as the U.S.A.C. (United States Auto Club). As important as racing was in Richard’s life, it never overshadowed the love he had for his family. Survivors include: Wife: Rebecca Jackson 2 Sons: Gary Jackson and his wife Diane Mickey Lee Jackson and his wife Angela 2 Step-Daughters: Monica & Melissa 9 Grandchildren 6 Great Grandchildren Many Nieces and Nephews Relatives and friends are invited to Richard’s Life Celebration from 4:00 until 8:00 p.m. Wednesday and again on Thursday starting at 10:00 a.m. at Benton-Glunt Funeral Home. The funeral service will be held at 2:00 p.m., July 26, 2018 at the funeral home. Burial will follow at Roselawn Memorial Gardens in Henderson, KY. Expressions of sympathy may take the form of contributions to St. Jude’s Children’ s Hospital, 262 Danny Thomas Pl, Memphis, TN 38105. Arrangements entrusted to Benton-Glunt Funeral Home, A Life Celebration® Home, online condolences may be made at www.bentonglunt.com

The family of Richard Lee Jackson created this Life Tributes page to make it easy to share your memories.

Send flowers to the Jackson family.