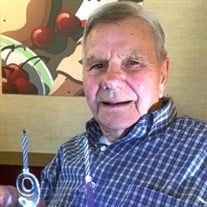 Richard Monroe Blake, age 97, of Henderson, KY passed away at 7:13 p.m. on April 2, 2022 at Baptist Health Deaconess in Madisonville, KY. Monroe was a United States Army Veteran. He enlisted on May 6, 1943 at the age of 18 years old in Evansville, IN. He was sent to England and was assigned to the 16th Infantry Regiment, 1st Infantry Division. Monroe was in the first wave of servicemen to storm Omaha Beach in the Normandy Invasion. His other battle campaigns included Battle of Hurtgen Forrest and Battle of the Bulge. He was honored with a Bronze Star. Monroe was a member of First Baptist Church and a retired carpenter. He loved woodworking and did so most of his life. Most people will remember him for the huge red tomatoes and vegetables that he grew from his own garden and sold at a stand he ran for many years. He was preceded in death by his first wife Sissy, second wife Wanda and last wife Marcella Blake; children Latina and Dennis Blake and siblings: Bill, Clifton, Marvin, Donnie Blake and sister Margie Watson. Monroe is survived by his sister Nadine Swallier (Albert) of Henderson, KY, his brother; Jerry Blake (Doris) of Evansville, IN, grandchildren, great grandchildren, nieces and nephews. Relatives and friends are invited to Monroe’s Life Celebration from 11:00 a.m. until the service on time on Sunday at Benton-Glunt & Tapp Funeral Home. The funeral service will be held at 2:00 p.m. on Sunday, April 10th, 2022 at the funeral home with Rev. Ray Buckman officiating. Burial will follow at Fernwood Cemetery in Henderson, KY, escorted in procession by the Patriot Guards. Military honors will be rendered by the American Legion Worsham Post #40. Memorial contributions may be made to the American Red Cross, Western Kentucky Chapter, 1700 Frederica St. Suite 105, Owensboro, KY 42301 or St. Anthony’s Hospice, 2410 S. Green Street, Henderson, KY 42420. Arrangements entrusted to Benton-Glunt & Tapp Funeral Home, A Life Celebration® Home, online condolences may be made at www.bentongluntandtappfuneralhome.com.

Richard Monroe Blake, age 97, of Henderson, KY passed away at 7:13 p.m. on April 2, 2022 at Baptist Health Deaconess in Madisonville, KY. Monroe was a United States Army Veteran. He enlisted on May 6, 1943 at the age of 18 years old in Evansville,... View Obituary & Service Information

The family of Richard Monroe Blake created this Life Tributes page to make it easy to share your memories.

Richard Monroe Blake, age 97, of Henderson, KY passed away at...

Send flowers to the Blake family.