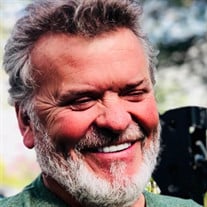 Reverend Timothy “Tim” Thomas Littrell, age 53, of Robards, KY passed away Friday, August 13th, 2021 at Owensboro Health Regional Hospital in Owensboro, KY. Tim was preceded in death by his parents, the late Reverend Lloyd and Mattie Littrell. Reverend Tim Littrell served as pastor of Cedar Log Faith Christian Church, which was established by his father years ago. He was a loving family man and devout Christian who lived for serving the Lord. The congregation of Cedar Log followed Tim and his messages faithfully; for a bit of fun, Tim had bought a trike to take on weekend rides and outings. The congregation followed with their cars and convertibles, spending the weekends together on road trips as extended family. Tim also believed that children should have a dog in their early years as a companion; this led them to being the new owners of Smokey, the family’s German Shepherd. He is survived by his wife, Tammie Littrell; daughter Lacie Stapleton (Daniel); sons Aaron Littrell (Ashley), Suede Littrell (Sheila), and Dustin Huffman (Chelsea), all of Robards, KY; sisters Sharon Gilford (E.G.), Lydia Littrell, and Reba Littrell; brothers Leon Littrell and Frankie Littrell, all of Henderson, KY. He is also survived by five grandchildren; Blaze Littrell, Abram Stapleton, Asher Littrell, Isabella Stapleton, and Zeke Stapleton, all of Henderson, KY, and several nieces and nephews. Services and burial for Reverend Littrell will be held at a later date. Arrangements entrusted to Benton-Glunt & Tapp Funeral Home, A Life Celebration® Home, online condolences may be made at www.bentongluntandtappfuneralhome.com

The family of Reverend Timothy "Tim" Thomas Littrell created this Life Tributes page to make it easy to share your memories.

Send flowers to the Littrell family.