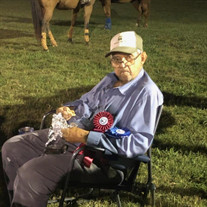 Ralph Edward Skaggs, age 77, of Henderson, KY, formerly of Reed, KY, passed away on Tuesday, December 21, 2021, at his home under the care of St. Anthony’s Hospice. For most of his life, Ralph worked in farming and agriculture. He was a truck driver for many years before retiring from Material Transport/ Mulzer Crushed Stone. As an FFA alumni, Ralph had a heart for teaching the younger generations about farming and was very involved in the Henderson County Fair, the Henderson County 4-H Council, the District Horse Council. He was hands on in the daily work of Hoofprints in the Sand Therapeutic Riding. He was preceded in death by his parents Wilber and Mary Skaggs and his brother Kenneth Skaggs. Ralph is survived by his wife of 58 years Alice Skaggs of Henderson, KY; daughter Tresa Skaggs of Henderson, KY; sons George Edward Skaggs (Paula) and Greg Alan Skaggs (Heather) both of Henderson, KY; 4 grandchildren: Rachel Bratton, Matthew Skaggs, Ashley Skaggs, and Aaron Garner; and 2 great-grandchildren Johnathan Skaggs and Chloe Yates. Relatives and friends are invited to Ralph’s Life Celebration from 5:00 p.m. until 8:00 p.m. on Monday, December 27, 2021, at Benton-Glunt & Tapp Funeral Home and again on Tuesday from 9:00 a.m. until the service time. The memorial service will be held at 10:00 a.m. on Tuesday at the funeral home with Charles Palmer officiating. Expressions of sympathy may take the form of contributions to St. Anthony’s Hospice, 2410 S. Green Street, Henderson, KY, 42420 and Hoofprints in the Sand Therapeutic Riding, 9965 Hwy 136 East, Henderson, Kentucky, 42420. Arrangements entrusted to Benton-Glunt & Tapp Funeral Home, A Life Celebration® Home, online condolences may be made at www.bentongluntandtappfuneralhome.com.

Ralph Edward Skaggs, age 77, of Henderson, KY, formerly of Reed, KY, passed away on Tuesday, December 21, 2021, at his home under the care of St. Anthony&#8217;s Hospice. For most of his life, Ralph worked in farming and agriculture. He was... View Obituary & Service Information

The family of Ralph Skaggs created this Life Tributes page to make it easy to share your memories.

Send flowers to the Skaggs family.