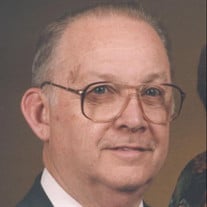 Preston Earl Carter, age 79, of Henderson, KY, went to be with his Lord on October 17, 2018, at his home under the care of St. Anthony’s Hospice. Preston, as a boy, worked with Powers Church, on the farm, then for many other farmers in hay and tobacco. At age 15 he started working for A & P Grocery and continued while in high school and during his time at Lockyear College. Preston always said no one ever had a better childhood then he did. He always played and worked hard. Preston began his career in insurance as an agent with Prudential Life Insurance, retiring after more than 20 years of service. He then joined Faught and Jones with Byrl Faught and Barbara Jones. He retired from Faught and Jones in 2006 following 22 years of dedicated service to the company and his many customers. He was preceded in death by his mother and father, Myrtle Fulton and Burt Melvin Carter; his sister and brother-in-law Joyce and Sonny Mitchell; his brother and sister-in-law Melvin and Junie Carter. Preston is survived by his wife of 36 years Sharron Carter; daughter Denise Herron and her husband Jay; son Kirk Carter; step-sons Eric Cotter and his wife Traci and Steven Cotter; grandchildren: Ryan, Lauren, Cameron, Sydney, Brystol; great grandchildren: Bentley and Oliver; sister-in-law Carole Mitchell; nieces and nephews: Sandy, Bruce, Janet, Henry, Cathy, John, Michael; and many cousins. Relatives and friends are invited to Preston’s Life Celebration from 1:00 p.m. until service time on Sunday, October 21, 2018 at Benton-Glunt Funeral Home. The memorial service will be held at 2:30 p.m. at the funeral home with Reverend Greg Lindsey officiating. Weather permitting, a graveside service will be held at 2:30 p.m. on Monday, October 22, 2018 at Roselawn Memorial Gardens. If there is rain, the graveside service will be re scheduled for a later date. Expressions of sympathy may take the form of contributions to St. Anthony’s Hospice, 2410 S. Green Street, Henderson, KY 42420 and/or Dayspring Church of God of Prophecy, 3001 US Hwy 60, Henderson, KY 42420. Arrangements entrusted to Benton-Glunt Funeral Home, A Life Celebration® Home, online condolences may be made at www.bentonglunt.com

Preston Earl Carter, age 79, of Henderson, KY, went to be with his Lord on October 17, 2018, at his home under the care of St. Anthony&#8217;s Hospice. Preston, as a boy, worked with Powers Church, on the farm, then for many other farmers in... View Obituary & Service Information

The family of Preston Earl Carter created this Life Tributes page to make it easy to share your memories.

Send flowers to the Carter family.