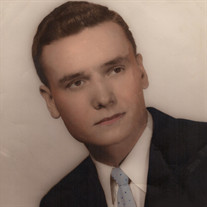 Philip Terriel “Terry” Bailey, 80, of Henderson, KY passed away Monday, February 11, 2019 at St. Vincent Hospital in Evansville. He was born on May 13, 1938 to Carl and Ruby (Berry) Bailey of Island, KY. He graduated from the University of Kentucky and worked his entire life in the Henderson area as a land surveyor and engineer. On January 31, 1959, Terry married Shirley Ann English and together they raised three children, Bruce, Beth, and Bonny. They remained married until his death, recently celebrating their 60th anniversary. Terry coached Pee-Wee baseball for 20 years and was a lifelong fan of the Chicago Cubs and the Kentucky Wildcats. He always made time for his children and grandchildren, supporting them in all of their sports and activities. He was well known for his dry sense of humor and always had a joke to tell. He was proceeded in death by his parents and two sisters, Nita Howell and Dixie Granat. He is survived by his wife Shirley, his three children, Bruce Bailey (Tori), Beth Bailey-Hazelwood (Owen), and Bonny Davenport, four grandchildren, Logan Bailey, Dylan Bailey, Jonah Polley, and Asher Davenport, his twin brother Jerry Bailey and two sisters, Mary Kirtley and Janet Hughes, nieces and nephews. Relatives and friends are invited to Terry’s Life Celebration from 1:00 p.m. until the service time on Saturday, February 23, 2019 at Benton-Glunt Funeral Home. A memorial service will be held at 3:00 p.m. on Saturday with Chaplain Tim Shockley officiating. Arrangements entrusted to Benton-Glunt Funeral Home, A Life Celebration® Home, online condolences may be made at www.bentonglunt.com

The family of Philip Terriel "Terry" Bailey created this Life Tributes page to make it easy to share your memories.

Send flowers to the Bailey family.