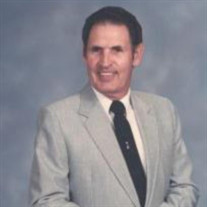 Rolland Ferguson was born on May 9, 1926 in Baskett, KY and passed away on December 7, 2020 in Henderson, KY. Due to the current crisis and limitations, Rolland’s funeral was held with the immediate family on Saturday, December 26 at Benton-Glunt & Tapp Funeral Home. Burial was in Fernwood Cemetery in Henderson, KY. Rolland is survived by his wife Marjorie; Rhonda Legate of Fiji Islands; Eli Legate (Jessie) of Denver, CO; Emily “MiMi” Legate, Becky Owen, Paul Kevin Overby, Charles Bourland (Lisa), Aric Bourland all of Henderson, KY; Beth and Scottie Comer (Maddie), (Will), (Wes), and Lori and Forrest Williamson (Laney), (Brody), and (Grady). Rolland was a gifted carpenter, whether it was furniture or adding a room. He worked as supervisor over construction for Gibbs Die Casting until he retired and then he fulfilled his dream of living in Florida for four months in the winter and fishing. He and Marge never missed a winter in Ft. Myers for 19 years, attending Parkway Baptist Church and making close friends. In Henderson he was a longtime member of Bennett Memorial Church and also later a member of First Baptist Church. He was acquainted with a large number of people in Henderson and was always willing to lend a “helping hand”. He served as a 50-year member of the Masonic Lodge and often drove children and parents to the Shriner’s Hospital. He loved everything in nature. He fed the birds and squirrels every morning and evening, even hiring someone to feed them the four months he was gone. He could not squeeze enough out of life, always planning, doing, but most of all loving the family and grandchildren. He saw the beauty in everything and thanked God every morning for it all. Arrangements entrusted to Benton-Glunt & Tapp Funeral Home, A Life Celebration® Home, online condolences may be made at www.bentongluntandtappfuneralhome.com.

Rolland Ferguson was born on May 9, 1926 in Baskett, KY and passed away on December 7, 2020 in Henderson, KY. Due to the current crisis and limitations, Rolland&#8217;s funeral was held with the immediate family on Saturday, December 26 at... View Obituary & Service Information

The family of Percy Rolland Ferguson created this Life Tributes page to make it easy to share your memories.

Send flowers to the Ferguson family.