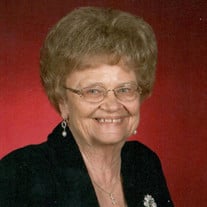 Peggy A. Stolzy Waide Peggy A. Stolzy Waide, age 86, of Henderson, KY, passed away at 5:53 pm Saturday, December 8, 2018 at Lucy Smith King Care Center under the care of St. Anthony’s Hospice. She was the daughter of Hardin and Ethel Tillotson Davis and sister of Rosalee Davis Edens. From a young age, she attended Bennett Memorial United Methodist Church. She was a member of First Assembly of God Church where she worked in the daycare for many years. Previously she had worked at Jimmy’s Drive In, Ken’s Corner and Greg’s Restaurant. She met many people and made many friends along the way. Peggy was preceded in death by her parents, first husband, William N. Stolzy in 1998 and her second husband, Glendol W. Waide in 2007, her sister, Rosalee and niece, Patsy Edens Ferguson. Survivors include: Son, Harry Stolzy (Kim): Grandchildren, Tara Slaughter Dixon, Katie Stolzy Giles (Ryan)and 3 Great Grandchildren, Logan Dixon, Livia Dixon and Ava Giles. Relatives and friends are invited to Peggy’s Life Celebration from 5:00-7:00 pm Tuesday, December 11, 2018 and again on Wednesday from 9:00 am until service time at Benton-Glunt Funeral Home, Henderson, KY. The service will be held at 11:00 am on Wednesday at the funeral home with Rev. Donnie Risley officiating. Burial will follow at Fernwood Cemetery in Henderson, KY. Expressions of sympathy may take the form of contributions to St. Anthony’s Hospice, 2410 S. Green Street, Henderson, KY 42420 or Alzheimer’s Association. Arrangements entrusted to Benton-Glunt Funeral Home, A Life Celebration® Home, online condolences may be made at www.bentonglunt.com

Peggy A. Stolzy Waide Peggy A. Stolzy Waide, age 86, of Henderson, KY, passed away at 5:53 pm Saturday, December 8, 2018 at Lucy Smith King Care Center under the care of St. Anthony&#8217;s Hospice. She was the daughter of Hardin and Ethel... View Obituary & Service Information

The family of Peggy Stolzy Waide created this Life Tributes page to make it easy to share your memories.