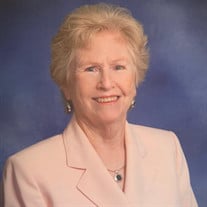 Norma Gayle Duncan, age 80, Henderson, KY, passed away peacefully with her daughter by her side on October 13, 2020 at Redbanks Nursing Home under the care of St. Anthony’s Hospice. Norma was preceded in death by her parents Malcolm and Mozelle Villines. She was a member of Immanuel Baptist Temple now known as Grace Point Church. Norma’s love of children led her to work at the Immanuel Baptist Temple Child Development Center. She babysat her grandchildren and great-grandchildren until they were school aged. She enjoyed horse back riding, crocheting, and playing with her grand and great-grandchildren. Norma is survived by her husband of 61 years Clarence Duncan, Jr.; two sons, Tim and his wife Judy, and Dwight and his wife Christina; and a daughter, Sherri Mayer and her husband Kevin, all of Henderson, KY. Seven grandchildren, Matt Duncan (Aimee), Mike Duncan (Donna), Mindy Blanford (Terry), Katie Brooks (Eric), Tyler Mayer, Kayla Walenga (Ryan), and Bryce Duncan; 13 great-grandchildren; two sisters, Diane Holmes and Brenda Villines of Henderson, KY; one brother Mike Villines of Henderson, KY; and nieces and nephews. Relatives and friends are invited to Norma’s Life Celebration from 4:00 until 8:00 p.m. on Friday and again on Saturday from 9:00 a.m. until the service time at Benton-Glunt & Tapp Funeral Home. The funeral service will be held at 11:00 a.m. on Saturday, October 17, 2020 at the funeral home with Reverend Tom Emmerson officiating. Entombment will follow in Fairmont Mausoleum in Henderson, KY. The family would like to thank the staff of Redbanks Nursing Home, St. Anthony’s Hospice, and Dr. Paul Wilder for their compassionate care. Expressions of sympathy may take the form of contributions to St. Anthony’s Hospice, 2410 S. Green St., Henderson, KY, 42420 and the Alzheimer's Association, 701 N, Weinbach Ave, Evansville, IN, 47711. Arrangements entrusted to Benton-Glunt & Tapp Funeral Home, A Life Celebration® Home, online condolences may be made at www.bentongluntandtappfuneralhome.com.

Norma Gayle Duncan, age 80, Henderson, KY, passed away peacefully with her daughter by her side on October 13, 2020 at Redbanks Nursing Home under the care of St. Anthony&#8217;s Hospice. Norma was preceded in death by her parents Malcolm and... View Obituary & Service Information

The family of Norma Gayle Duncan created this Life Tributes page to make it easy to share your memories.

Send flowers to the Duncan family.