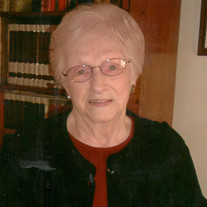 Nadine Frances Igleheart Crowder, age 98, of Henderson, KY, passed away at 7:22 a.m., Monday, August 27, 2018, at Newburgh Healthcare. In addition to her parents, James and Anna Ruth (Kirtley) Igleheart, Nadine was preceded in death by her ex-husband, William G. “Bill” Crowder, her daughter, Tonya Cummings, and her brother and his wife, Carl and Evelyn Igleheart. Nadine graduated from Barret Manuel Training High School in 1939. Later in life, she went on to earn certification at vocational/secretarial school in 1974. Nadine was a faithful, longtime member of Henderson’s First Baptist Church. She was baptized there in 1937 and had since been an active member, even working as a secretary for the church for more than 20 of those years. Nadine is survived by her daughter; Billie Jean Paul and her husband Bill of Evansville, IN, granddaughter; Monique Hall Nash and her husband James of Evansville, IN, great grandchildren; Angela R. Stearns and Wesley Alan Clark both of Evansville, IN, son-in-law; Johnny R. Cummings and his family of Uniontown, KY, and nieces. Relatives and friends are invited to Nadine’s Life Celebration from 2:00 until 8:00 p.m. on Wednesday at Benton-Glunt Funeral Home and again on Thursday from 1:00 p.m. until the service time at Henderson’s First Baptist Church. The funeral service will be held at 2:00 p.m., Thursday, August 30, 2018 at the church with Reverend Karl Crowe officiating assisted by Dr. Todd Linn and Reverend Rich Stratton. Burial will follow at Roselawn Memorial Gardens in Henderson, KY. Expressions of sympathy may take the form of contributions to Henderson’s First Baptist Church building fund or music ministry, Heritage Hospice of Evansville, IN, and/ or Newburgh Healthcare Activity Department of Newburgh, IN. Arrangements entrusted to Benton-Glunt Funeral Home, A Life Celebration® Home, online condolences may be made at www.bentonglunt.com

Nadine Frances Igleheart Crowder, age 98, of Henderson, KY, passed away at 7:22 a.m., Monday, August 27, 2018, at Newburgh Healthcare. In addition to her parents, James and Anna Ruth (Kirtley) Igleheart, Nadine was preceded in death by her... View Obituary & Service Information

The family of Nadine Frances Igleheart Crowder created this Life Tributes page to make it easy to share your memories.

Send flowers to the Crowder family.