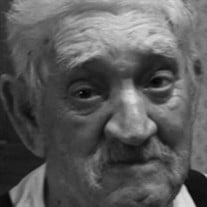 Max Cannon, age 89, of Henderson, KY, passed away at 11:53 p.m., Friday, August 28, 2020, at his home surrounded by his family under the care of St. Anthony’s Hospice. In addition to his parents, Carlos and Ruby Cannon, Max was preceded in death by his daughter, Diana Cannon, and his siblings: Polly Droll, Norman Cannon, June Spencer, Judy Adams, and Rosie Brack. Max served his country proudly in the United States Army during the Korean Conflict. He enjoyed playing music, golfing, and fishing. Max was a true jokester and could really spin some good ones. He will be sorely missed. Max is survived by his wife of 65 years, Mary Tapp Cannon; daughter Tammy Lee Wathen and her husband Doug; sons Paul Cannon and his wife Cheri and Cliff Cannon and his wife Trudy all of Henderson, KY; sister Susie Adams of Vermont; brothers Billy Cannon and his wife Linda of Evansville, IN and Bobby Cannon of Henderson, KY. Max was a loving and supportive father, grandfather, and great grandfather to many children who adore him. He is also survived by many nieces and nephews. Max’s family will have a private service officiated by Reverend Donnie Risley followed by burial at Roselawn Memorial Gardens. Military honors will be rendered by the American Legion Worsham Post #40. Pallbearers will be Marty Lee, Marshall Lee, Stephen Sutton, Adam Cannon, Nick Cannon, and Alex Cannon. Expressions of sympathy may take the form of contributions to St. Anthony’s Hospice. Arrangements entrusted to Benton-Glunt & Tapp Funeral Home, A Life Celebration® Home, online condolences may be made at www.bentongluntandtappfuneralhome.com.

Max Cannon, age 89, of Henderson, KY, passed away at 11:53 p.m., Friday, August 28, 2020, at his home surrounded by his family under the care of St. Anthony&#8217;s Hospice. In addition to his parents, Carlos and Ruby Cannon, Max was preceded... View Obituary & Service Information

The family of Max Cannon created this Life Tributes page to make it easy to share your memories.

Send flowers to the Cannon family.