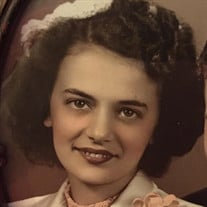 Mary Jo Williams, age 87, of Henderson, KY, passed away at 7:30 p.m., Sunday, August 16, 2020, at her home. She was preceded in death by her parents A.P. and Blanche Fulkerson and her brother Randall “Purple” Fulkerson. Mary Jo was a Kentucky Colonel and held the office of president of the Henderson Women’s Democratic Club. She had many jobs but most importantly she was owner operator of her family business Courtesy Shell Service Station. She won numerous awards for sales and various titles. Mary Jo was an astounding cook; whether cooking for a slew of her children’s friends or preparing food for the Governor and Lt. Governor of the state, she loved feeding people. Mary Jo was an amazing woman who gave 110% of herself to the things she loved dearly. As the self-proclaimed “Hub of the wheel of her family” she kept all the spokes running smoothly. She is survived by her husband of 72 years Robert L. Williams of Henderson, KY; daughter Robin Williams of Henderson, KY; 2 sons Wayne Alan Williams and his wife Delores of Mobile, AL and Dennis Louis Williams and his wife Heather of Murfreesboro. TN; brother Michael Alan Fulkerson and his wife Peggy of Florida; 5 grandchildren: Emily, Nathan, Kari, Margaret, and Kloe; 3 great-grandchildren: Parker, Logan, and one on the way; 4 nieces and 1 nephew; and many step-grandchildren and step-great-grandchildren. Relatives and friends are invited to Mary Jo’s Life Celebration from 5:00 p.m. until 7:00 p.m. on Wednesday and again on Thursday from 1:00 p.m. until the service time at Benton-Glunt & Tapp Funeral Home. The service will be held at 2:00 p.m. on Thursday, August 20, 2020 at the funeral home. Burial will follow in Roselawn Memorial Gardens in Henderson, KY. Expressions of sympathy may take the form of contributions to St. Anthony’s Hospice, 2410 S. Green St., Henderson, KY 42420 and New Hope Animal Rescue, 526 Atkinson St., Henderson, KY 42420. Arrangements entrusted to Benton-Glunt & Tapp Funeral Home, A Life Celebration® Home, online condolences may be made at www.bentongluntandtappfuneralhome.com.

The family of Mary Jo Williams created this Life Tributes page to make it easy to share your memories.

Send flowers to the Williams family.