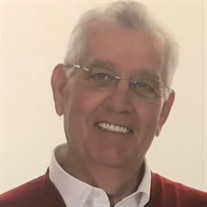 Martin J. “Sonny” Mills, age 77, of Henderson, KY, passed away Friday, November 9, 2018 under the care of Kindred Hospice, at Walnut Creek Alzheimer’s Special Care Center, in Evansville, Indiana. Sonny was born on January 27, 1941, in Henderson to Johnny and Inez Mills. Sonny was a standout multi-sport athlete who graduated from Henderson City High. Upon graduation, he was an extremely hardworking business owner who began his career in the filling station business prior to acquiring Nu-Look Cleaners, which he owned and operated for nearly fifty years. Sonny was a dedicated Christian who taught Bible classes in adult Sunday School for thirty years at First Assembly of God, also serving the church as a deacon for over twenty-five years. He was very dedicated to reading and studying the Bible and loved to share the word of faith to anyone who would listen. Sonny was preceded in death by his parents; infant daughter, Elizabeth Ann; brothers, Tom Mills and Delbert Mills; sisters, Chestine Crafton and Pauline Byrne Lewis; and sister-in-law, Jane Hancock. Sonny is survived by the love of his life, Marsha, to whom he was married for nearly sixty years; children, Penny Kramer (Scott) of Owensboro, KY and Robert M. “Robby” Mills (Vickie) of Henderson, KY; grandchildren, Joey Kramer of Park Hills, KY, Caleb Mills (Hannah) of Nashville, TN, Paige Kramer of Owensboro, KY, Chelsea Mills of Lakeland, FL, Noah Mills of Henderson, KY; sisters, Anna Mae Beck, Ruth Jacobs, and Martha Standridge , all of Henderson, KY; brothers-in-law, Blake Connell of Miami, FL and Charlie Hancock of Henderson, KY; and many nieces and nephews. The family would like to extend a special debt of gratitude to St. Anthony’s Hospice of Henderson, Kindred Hospice of Evansville, and the dedicated and caring staff of Walnut Creek. Relatives and friends are invited to Sonny’s Life Celebration from 10:00 a.m. until service time on Monday, November 12, 2018 at First Assembly of God Church, 2208 HWY 60 E, Henderson, KY. The funeral service will be held at 2:00 p.m. on Monday at the church with Pastor Jeff Ferguson officiating. Burial will follow at Roselawn Memorial Gardens in Henderson, KY. Expressions of sympathy may take the form of contributions to Marsha’s Place, St. Anthony’s Hospice, or Kindred Hospice in Evansville, IN. Arrangements entrusted to Benton-Glunt Funeral Home, A Life Celebration® Home, online condolences may be made at www.bentonglunt.com

The family of Martin J. Sonny Mills created this Life Tributes page to make it easy to share your memories.

Send flowers to the Mills family.