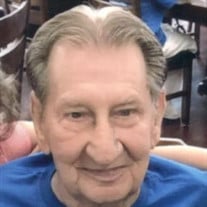 Marlen “Gene” Bruce, affectionately known as “Bubba”, age 86, of Henderson, KY, passed away on Friday, January 14, 2022 at his home under the care of St. Anthony’s Hospice. Gene was a veteran of the United States Army. He served from 1953-1955 during the Korean Conflict and was stationed in Alaska. He was raised on a farm in Kuttawa, Kentucky; the youngest of the sons born to Herbert and Hopie Doom Bruce. He was a heavy equipment operator for 41 years for Operating Engineers Local #181. He traveled throughout the United States and was involved in the construction of many dams. He married Gloria Hogan in July of 1973. Gene was a faithful member of Airline Baptist Church for many years. He was a member of the Henderson Masonic Lodge #958. He enjoyed going to gun and knife trade shows in the area and had a vast collection of both. In addition to his parents, Gene was preceded in death by his wife Gloria Bruce, his son Daniel Lynn Bruce, and both brothers Jewel and Noble Bruce. He is survived by 3 daughters: Denia Davis of Louisville, KY, Michelle Eckels of Evansville, IN, and Jessyca Cardwell and her husband Gary of Waverly, KY; son Wynn Allen Eckels and his wife Daisy of Henderson, KY; many grandchildren and great-grandchildren. Relatives and friends are invited to Gene’s Life Celebration from 5:00 until 8:00 p.m. on Wednesday and again on Thursday from 9:00 a.m. until the service time at Benton-Glunt & Tapp Funeral Home. The funeral service will be held at 10:00 a.m. on Thursday, January 20, 2022 at the funeral home with Reverend John Brumfiel officiating. Burial will follow at Macedonia Cemetery in Kuttawa, KY. Military honors will be rendered by the American Legion Worsham Post #40. The family would like to say a special thank you to St. Anthony’s Hospice and to Patrick and Jessica Beaven and the entire staff at The Homeplace for the extraordinary care they provided for Gene. Expressions of sympathy may take the form of contributions to St. Anthony’s Hospice, 2410 S. Green St., Henderson, KY, 42420. Arrangements entrusted to Benton-Glunt & Tapp Funeral Home, A Life Celebration® Home, online condolences may be made at www.bentongluntandtappfuneralhome.com.

The family of Marlen "Gene" Bruce created this Life Tributes page to make it easy to share your memories.

Send flowers to the Bruce family.