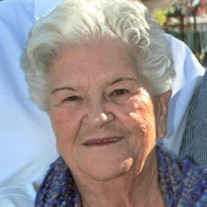 Everyone that loved her referred to her as “Eech”, “Wheezy”, “Momma” or “Mamaw”. Louise E. Meyers, age 84, of Henderson, KY formerly of Greenup Co, Ky passed away on Friday, September 4, 2020 at Kings Daughter Hospital, Ashland, Kentucky. She was preceded in death by parents; Opal Bailey Marion and her husband Jim, twin brothers; Ronald and Donald Brown, her husband Forest E. “F.E.” Meyers and daughter Connie Johnson. Mom was a resident of Henderson, Ky but her heart never left Greenup County. They were a close knit community where her family lives today. We were so proud she was able to return there to visit in the last couple weeks after a brief illness. God answered all her prayers. She enjoyed bluegrass music and going to the Poppy Mountain Festival with her sisters. Whether it was the Bluegrass Festival or W.C. Handy Festival you would find her there with her lawn chair on the front row. She enjoyed bingo and hit the jackpot on many occasions. Horseracing is a family tradition. It ran deep in her blood and frequently attended the Kentucky Derby, Audubon Raceway and Ellis Park. She never wanted to miss being there early enough to study the program and bet the daily double. Before moving to Henderson in 1968, she worked at Shriner’s Children’s Hospital in Lexington, Ky. There she became interested in caregiving and would later become a private sitter for elder people. She enjoyed cooking and was known for her spaghetti pasta, stuffed peppers, apple dumplings and perfect fried potatoes. Her smile was infectious and she had many friends. She was a resident of St. Joseph Community for over 10 years where several of her friends reside. Shirley, Vicky and Minnie, she loved you so! Survivors include daughters: Belinda Parker (Bobby), Ashland, KY, Barbara Meyers Shiver (David Todd), Henderson, Ky, Sons; Allen Meyers (Nanci) Fresno, CA , Michael Meyers (Jonna) Henderson, KY, David Meyers (Rian) Savanah, GA, James Meyers, Henderson, KY and Jeffrey Meyers (Tracy) Madison, AL, 2 Sisters: Shirley Flocker of Worthington, KY and Norma LeMaster of Flatwoods, KY. Several Grandchildren and great grandchildren, Nieces and Nephews. A Private Graveside service will be held at Roselawn Memorial Gardens, Henderson, KY. Rev. Alan Chamness will officiate. Burial to follow. Arrangements entrusted to Benton-Glunt & Tapp Funeral Home, A Life Celebration® Home, online condolences may be made at www.bentongluntandtappfuneralhome.com.

The family of Louise E. Meyers created this Life Tributes page to make it easy to share your memories.

Everyone that loved her referred to her as “Eech”, “Wheezy”,...

Send flowers to the Meyers family.