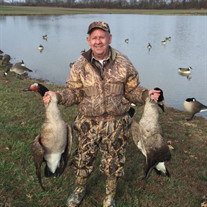 Leland “LD” Lancaster, 81, passed peacefully in his sleep at his home on the afternoon of November 16, 2020 after suffering from long term illnesses. He was born March 14, 1939 in Muhlenberg County, Kentucky, the son of Robert (Bob) and Thelma (Naw) Lancaster. He was a graduate of Henderson City High School and Murray State College. He was honorably discharged from the US Navy and employed at Earle C. Clements Job Corp Center for over 33 years, retiring in June 2001. He was a member and Past Master of Corydon Masonic Lodge #799 and a 32-degree Scottish Rite Mason. Other honors and memberships included: Kentucky Colonel, Ducks Unlimited and National Rifle Association. He was an active member of Finley Baptist Church, involved in numerous activities including the building fund and vacation Bible school. He was preceded into our Father’s arms by his father and mother, sister Marnell and wife Martha. He is survived by his brother Glenn, nieces Brenda Knight and Chiquita Prewitt, nephew Keith Lancaster, brother-in-law Paul Lockridge and numerous grand-nephews and grand-nieces. LD was truly loved by everyone who knew him. He had an outgoing personality, giving spirit and laugh that could light up a room. LD never met a stranger or failed to lend a helping hand. He loved the outdoors and spent as many hours as possible fishing, hunting and training Labrador retrievers for Hunting Retriever Club (HRC) field trials. He and Glenn, “The Lancaster Boys”, hunted together for over 60 years in locations in Mexico, Canada and across the United States. While primarily waterfowl hunters, at one time or another they pursued pretty much everything that has a season, and to hear them tell it, with great success. They were covered in a Field and Stream article and featured in several Shawn Stahl “Fowl Pursuit” videos. Among the times LD enjoyed most were those pursuing a HRCH (Finished Level Hunt Test) certification for Black Bear - one of his many labs, goose hunting trips to the Manitoba and Saskatchewan provinces in Canada and “working” as a guide at Glenn’s Hunting Club at Crab Orchard Refuge in Marion, Illinois. Relatives and friends are invited to LD’s Life Celebration from 11:00 a.m. until 1:00 p.m. on Thursday, November 19, 2020 at Benton-Glunt & Tapp Funeral Home. Funeral services will be private with Reverend Jeff Burke officiating and burial will be in Fairmont Cemetery in Henderson, KY. In lieu of flowers, LD requested that you send donations to the Finley Baptist Building Fund and St. Anthony’s Hospice. Arrangements entrusted to Benton-Glunt & Tapp Funeral Home, A Life Celebration® Home, online condolences may be made at www.bentongluntandtappfuneralhome.com.

The family of Leland "LD" Lancaster created this Life Tributes page to make it easy to share your memories.

Leland “LD” Lancaster, 81, passed peacefully in his sleep at...

Send flowers to the Lancaster family.