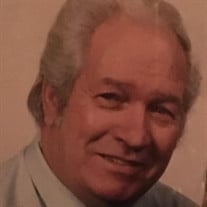 Lee Stone, age 79, of Henderson, KY, passed away at 9:12 p.m. on Tuesday, January 19, 2021 at Deaconess Midtown Hospital in Evansville, IN. Lee was preceded in death by his parents James and Beatrice Stone, sisters June Beumer, Judy Kurtz, and Alice Goodwin, and brothers Stevie Stone, Robert Stone, Kenneth Stone, Darrell Stone, Little Tommy Stone and Tommy Powell. Lee served in the United States Army as a combat medic with the First Calvary Air Assault. He earned a combat medical badge for being under fire for 40 days while caring for his unit. That overwhelming care extended after his service to his friends and family. He was such a generous and faithful man. Lee loved his family, and he loved the Lord. He is survived by his wife of 55 years Linda Stone of Henderson, KY; daughter Rhonda Brooks and her husband Scott of Henderson, KY; sons: Tim Stone and his wife Lisa, Keith Stone and his wife Amanda, and Steven Stone and his wife Khori all of Henderson, KY; sister Sharon Times of Henderson, KY; brothers Johnny Stone and David Stone both of Henderson, KY; 11 grandchildren: Brianna Stone (Alfonso), Joshua Stone, Kyla Stone, Katie Stone, Allison Stone, Jillian Stone, Aeden Cantera, Norah Stone, Anistyn Stone, Colhton Dossett, and Jetta Wheeler. Relatives and friends are invited to Lee’s Life Celebration from 5:00 until 8:00 p.m. on Friday and again from 9:00 a.m. until the service time on Saturday at Benton-Glunt & Tapp Funeral Home. The funeral service will be held at 11:00 a.m. on Saturday, January 23, 2021 at the funeral home with Brother Mark Compton officiating. Full military honors will be rendered by the American Legion Worsham Post #40. The family would like to honorably mention Brother Anthony Young and Brother Dwight Jackson for their care and compassion over the years. Masks are required prior to entry with limited seating per Covid-19 regulations. Arrangements entrusted to Benton-Glunt & Tapp Funeral Home, A Life Celebration® Home, online condolences may be made at www.bentongluntandtappfuneralhome.com.

The family of Lee Stone created this Life Tributes page to make it easy to share your memories.

Send flowers to the Stone family.