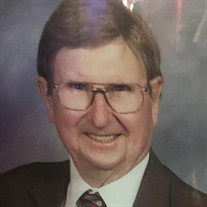 Leamon Ray Woodard, age 97, of Henderson, KY, passed away on Thursday, August 30, 2018, at the Lucy Smith King Care Center under the care of St. Anthony’s Hospice. Leamon was preceded in death by his parents, Ezra and Ara Woodard, his wife Wilma Woodard, two sisters, Katherine Cole and Dorothy Henderson, and three brothers, Alvis Woodard, Carvil Woodard, and Elbert “Bo” Woodard. Leamon was a WWII Army Veteran. He worked for Period Tables and retired from Zenith in 1986. He was a member of Calvary Baptist Church. Woodworking was Leamon’s life, he was a perfectionist at his art. He enjoyed crafting items for his family, including a china cabinet for his wife, a wagon and cabinets for his children. He often repaired numerous pieces of furniture for people far and near. Survivors include: 1 Daughter: Marilyn McCormick and her husband John of Robards, KY 1 Son: Donald Ray Woodard and his wife Marilyn of Robards, KY 4 Sisters: Maelene Conley, Marthella Jenkins, Corene Kellough, Shirley Thurby all of Henderson, KY 5 Grandchildren 13 Great Grandchildren 1 Great Great Grandchild Nieces and Nephews Relatives and friends are invited to Leamon’s Life Celebration from 4:00 until 8:00 p.m. Tuesday and again on Wednesday starting at 10:00 a.m. at Benton-Glunt Funeral Home. The funeral service will be held at 2:00 p.m. Wednesday, September 5, 2018 at the funeral home. Burial will follow at Roselawn Memorial Gardens in Henderson, KY. Full military honors will be rendered by the American Legion Worsham Post #40. Expressions of sympathy may take the form of contributions to Calvary Baptist Church, 2360 Green River Rd, Henderson, KY 42420. Arrangements entrusted to Benton-Glunt Funeral Home, A Life Celebration® Home, online condolences may be made at www.bentonglunt.com

Leamon Ray Woodard, age 97, of Henderson, KY, passed away on Thursday, August 30, 2018, at the Lucy Smith King Care Center under the care of St. Anthony&#8217;s Hospice. Leamon was preceded in death by his parents, Ezra and Ara Woodard, his... View Obituary & Service Information

The family of Leamon Woodard created this Life Tributes page to make it easy to share your memories.

Send flowers to the Woodard family.