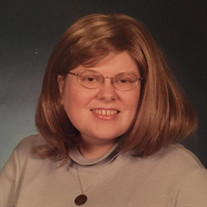 Kimbra Suzanne Wilder Gish, 46, of Henderson, Kentucky passed away peacefully on Wednesday, April 7, 2020 surrounded by family at the Lucy Smith King Care Center of St. Anthony’s Hospice. She was born August 5, 1973, in Middlesboro, Kentucky, the daughter of Lonnie and Helen Wilder. A 1991 graduate of Middlesboro High School, she completed a B.A. degree in English at Lincoln Memorial University in 1995 and a M.S. degree with ALA credentials in Library and Information Science in 1996 at the University of Tennessee. She was awarded an internship at the Eskind Biomedical Library of Vanderbilt University Medical Center. Upon completion, she was invited to join the library staff and worked there a number of years as a Biomedical Librarian until moving to Henderson. She also enjoyed writing. A sincere Christian, Kimbra loved the Lord and helping others. While volunteering at Camp Horizon, a camp for kids with cancer near Nashville, Tennessee, she met Darren Gish of Henderson, a volunteer counselor there. Darren became the love of her life and they were united in marriage on June 19, 1999. Kimbra was devoted to her husband and cherished her family, friends and fur baby Paco. She will be greatly missed by her husband, Darren Gish of Henderson; her parents, Helen and Lonnie Wilder of Middlesboro; mother-in-law, Kay Gish of Henderson and brother-in-law, Jeff Gish of Evansville, Indiana; two special uncles, Don and Paul Wilder of Harrogate, Tennessee; a special aunt and uncle, Mary and Fred Yeary of Charlotte, North Carolina; and a special cousin she grew up with, James Carey of Cleveland, Ohio. She will be greatly missed by her many other family members and friends around the world as well as her Trinity Lutheran Church family. Due to Coronavirus Pandemic restrictions, the family will have a private service at Benton-Glunt & Tapp Funeral Home. The Reverend Mark Moog of Trinity Lutheran Church will conduct the service with music provided by Gina Hurt. Interment will be at Fernwood Cemetery. Celebration of Life programs will be held at later dates in both Middlesboro and Henderson, Kentucky. In lieu of flowers, the family requests memorial contributions be made to Trinity Lutheran Church, 501 North Elm Street, Henderson, Kentucky 42420 or St. Anthony’s Hospice, 2410 South Green Street, Henderson, Kentucky 42420. Arrangements entrusted to Benton-Glunt & Tapp Funeral Home, A Life Celebration® Home, online condolences may be made at www.bentongluntandtappfuneralhome.com.

The family of Kimbra Suzanne Wilder Gish created this Life Tributes page to make it easy to share your memories.

Send flowers to the Gish family.