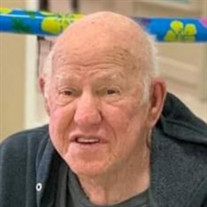 Kenneth E. Montgomery, age 82, of Henderson, KY, passed away at 3:23 p.m., Friday, October 9, 2020, at Deaconess Gateway Medical Center in Newburgh, IN. In addition to his parents, William and Mary Montgomery, Kenneth was preceded in death by his second wife, Faye Coney Montgomery; sister, Doris Cravens; and brother, Herbert Montgomery. Kenneth was born in Spottsville, KY and lived there most of his life. He moved to Henderson to go to work for Paul Smith at National Fence Company. He was later employed by the International Iron Workers Local #103 for 16 years. When his mother passed away, Kenneth was drawn to funeral service and was brought into the profession by Maynard V. Glunt. He thought so very highly of Maynard and was an excellent student under his mentorship. Kenneth served families for over 25 years at Benton-Glunt Funeral Home and Tapp Funeral Home before retiring in 2000. Even then, he continued on part time in a support staff position for many years to come. Kenneth enjoyed spending time at The Gathering Place and stopping in to have donuts with his friends at the funeral home. Kenneth is survived by his daughter, Tina Moore and her husband Gary of Henderson, KY; son, Eugene Montgomery and his wife Jennifer of Colorado Springs, CO; step-children: Lisa Thomas, Debra Walker, and Craig Minor all of Henderson, KY; grandson, Kevin Montgomery of Colorado Springs, CO; nieces and nephews. Relatives and friends are invited to Kenneth’s Life Celebration from 5:00 p.m. until 7:00 p.m. Wednesday and again on Thursday starting at 10:00 a.m. at Benton-Glunt & Tapp Funeral Home. The funeral service will be held at 1:00 p.m., October 15, 2020 at the funeral home with Reverend Tim Shockley officiating . Burial will follow at Fairmont Cemetery in Henderson, KY. Expressions of sympathy may take the form of contributions to St. Anthony’s Hospice: 2410 S. Green Street, Henderson, KY 42420, https://stanthonyshospice.org/. Arrangements entrusted to Benton-Glunt & Tapp Funeral Home, A Life Celebration® Home, online condolences may be made at www.bentongluntandtappfuneralhome.com.

Kenneth E. Montgomery, age 82, of Henderson, KY, passed away at 3:23 p.m., Friday, October 9, 2020, at Deaconess Gateway Medical Center in Newburgh, IN. In addition to his parents, William and Mary Montgomery, Kenneth was preceded in death by... View Obituary & Service Information

The family of Kenneth Montgomery created this Life Tributes page to make it easy to share your memories.

Send flowers to the Montgomery family.