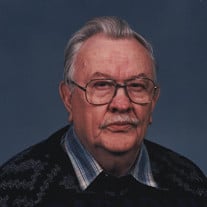 Kenneth Ray Hailman, age 90, of Henderson, KY, passed away at 7:16 a.m., Wednesday, April 7, 2021, at Deaconess Henderson Hospital, Henderson, KY. Kenneth was preceded in death by his mother, Minnie Hailman, father, Johnny Hailman, and a daughter in law Sue Hailman. Kenneth had been a member of Airline Baptist Church since 1958. He was a U.S. Army and Reserves veteran. Kenneth was a member of the American Legion Honor Guard, Worsham Post #40, and Gideon International. He worked for R.C.A. Television as a serviceman for 27 years. Kenneth opened his own shop where he worked from 1988-2010. He enjoyed making wooden toys and was known by others as the “Kentucky Toy Maker”. Kenneth displayed and sold his creations at Christmas Village and Audubon State Park Craft Shows. He and his wife Charlotte were foster parents to teenage children. He is survived by his wife of 66 years Charlotte Hailman; daughter Cindy McCollum (Roy) of Henderson, KY; son Terry Hailman of Robards, KY; sisters Loretta Brooks of Providence, KY, and Barbara Jo Chaney of Henderson, KY; 3 grandchildren Benjamin McCollum, Amber Shimek, and Jarred Hailman; 8 great-grandchildren; and 5 great-great grandchildren. Relatives and friends are invited to Kenneth’s Life Celebration from 4:00 p.m. until 8:00 p.m on Monday and again on Tuesday starting at 9:00 a.m. at Benton-Glunt & Tapp Funeral Home. The funeral service will be held at 10:00 a.m., April 13, 2021 at the funeral home with Reverend Nathan Whisnant officiating. Burial will follow at Roselawn Memorial Gardens in Henderson, KY. Military honors will be rendered by the American Legion Worsham Post #40. Due to Gov. Beshear’s mandate, masks are required prior to entry with limited seating per Covid-19 regulations. Expressions of sympathy may take the form of contributions to Gideon’s International, P.O. Box 1163 Henderson, KY 42419 and Airline Baptist Church,1942 Clay Street, Henderson, KY 42420. Arrangements entrusted to Benton-Glunt & Tapp Funeral Home, A Life Celebration® Home, online condolences may be made at www.bentongluntandtappfuneralhome.com

The family of Kenneth Ray Hailman created this Life Tributes page to make it easy to share your memories.

Kenneth Ray Hailman, age 90, of Henderson, KY, passed away at...

Send flowers to the Hailman family.