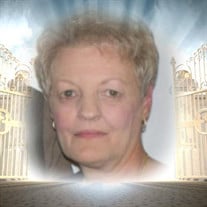 Joyce Townsend Wilson, age 71, of Henderson, KY, entered into her heavenly home at 1:04 p.m. Friday, May 3, 2019 at Henderson Nursing and Rehabilitation Center under the care of St. Anthony’s Hospice. She was preceded in death by her father, Lilburn Townsend, in 1960, her stepfather, Lloyd Carter, in 1996, and her mother, Ilyene Townsend Carter in 2015. Joyce was a member of East End Tabernacle Church from 1947 until 2000 and then attended End Time Pentecostal Church where she was involved with music and singing. Joyce is survived by her husband of 54 years, William “Bob” Wilson; two sons Rob Wilson and Scott Wilson; grandsons Dane and Dax Wilson; brother Jim Townsend; stepbrother Rick Carter and his wife Karen, all of Henderson, KY; stepsister Darlene Fuller and her husband Jackie of Greenville, KY; nieces and nephews. Joyce was employed at Pittsburg Tank and Tower Company as the human resources administrator from 2001 until retirement. She worked from 1986 until 2001 with her husband as agents of Greyhound Bus Lines/Western Union in Henderson, KY, Evansville, IN, Hopkinsville, KY, Ft. Campbell, KY, and Owensboro, KY. Relatives and friends are invited to Joyce’s Life Celebration from 3:00 until 8:00, Monday, May 6, 2019 and again on Tuesday starting at 9:00 a.m. at Benton-Glunt Funeral Home. The funeral service will be held at 11:00 a.m. on Tuesday at the funeral home with Reverend Jerry Emberton officiating. Burial will follow at Roselawn Memorial Gardens in Henderson, KY. Pallbearers will be nephews: Darrel Townsend, Jeff Townsend, Richard Carter, David Yates, Keith Ford, and Kevin Miller. Expressions of sympathy my take the form of memorial contributions made to St. Anthony's Hospice, 2410 S. Green Street, Henderson, KY 42420. Arrangements entrusted to Benton-Glunt Funeral Home, A Life Celebration® Home, online condolences may be made at www.bentonglunt.com.

Joyce Townsend Wilson, age 71, of Henderson, KY, entered into her heavenly home at 1:04 p.m. Friday, May 3, 2019 at Henderson Nursing and Rehabilitation Center under the care of St. Anthony&#8217;s Hospice. She was preceded in death by her father,... View Obituary & Service Information

The family of Joyce Townsend Wilson created this Life Tributes page to make it easy to share your memories.

Send flowers to the Wilson family.