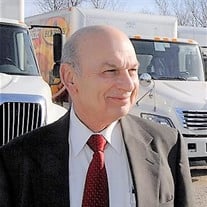 Joseph (Joe) Banna, of Henderson, Kentucky passed away on Thursday, November 29, 2018 surrounded with the love of family and caregivers at St. Anthony’s Lucy Smith King Care Center. A Catholic born on December 20, 1939 in Nazareth, Israel, the Armenian-Syrian descendant arrived in America passing thru Ellis Island in the spring of 1960 to attend college despite not speaking any English. He studied at the Baptist affiliated Campbellsville College in Campbellsville, Kentucky from 1960-1964 where he received his bachelor’s degree in business. In Campbellsville, he met and married his wife and best friend of 55 years, Lewellyn Sinclair. Together they moved to Michigan for Banna’s first jobs and had their only daughter, Leanne. He was employed by Central Grocery, Flint, MI, from 1964-66 and from 1966-69 by Vesley Company, LaPeer, MI. Banna and his family moved to Henderson, Kentucky when he was hired in 1969 as a purchasing agent of the national truck and trailer company, Hercules Manufacturing. He quickly rose to VP of Operations and in 1993 Banna was named President, a role in which he served until his retirement in December of 2009. Banna brought many innovations to Hercules, perpetuated its growth and was a primary reason the company remained in Henderson, KY. Banna oversaw Hercules relocation from an old plant on Main Street in Henderson to new facilities located on Adams and Bob Posey Streets. While much of Hercules’ work involves manufacturing custom built truck bodies & trailers, with no engineer on staff, most of the design work fell to Banna who described himself as an “engineer by experience rather than education”. Perhaps more important is the personal relationship Banna formed with customers, never promising anything he couldn’t do, being upfront and correcting anything that did not meet customer expectations. Banna did business strictly on the basis of a handshake and never had any contracts. Recognized as an honorable businessman, he based his business relationships on loyalty, honesty and integrity, and becoming a business partner with many of Hercules prime national customers. Upon his retirement in 2009 after 40 years of service, Banna was appointed President Emeritus of Hercules, a role he filled up until his death. Jeffrey A. Caddick, Hercules current CEO/Owner, stated “Mr. Banna was a continuous and constant force and presence at Hercules for 49 years, and while the loss is painful and he will be sorely missed, the simple fact of the matter is that Joe’s life’s work will live on in everything we do here at Hercules for many, many years to come.” Reflecting upon his 40 years with Hercules, Banna stated “It’s been a helluva ride. We’ve had ups and downs. But overall it has been wonderful”. He loved Hercules, its people and all associations. His biggest joy outside of his career was his only grandson along with his love of his daughter and entire family. He will be remembered for his unconditional love, his belly laughter as well as his love of pizza, pets, the occasional good beer or other alcoholic beverage, exotic foods, traveling, his UK Wildcats and tinkering with all things mechanical. Banna is preceded in death by his brother Henry Youssef Banna (Samia) and his parents Mary Masri Banna and Youssef Elias Banna, and his father and mother in law WC and Pinkie Sinclair. Banna is survived by his wife of 55 years, Lewellyn Sinclair Banna; his daughter Leanne Banna-Pritchett and son-in-law Steve Pritchett all of Henderson; grandson Chase Pritchett of Atlanta, Georgia; his brothers Steve and J.C Nassim Banna of Hot Springs, Arkansas; sisters Siham Banna (Tony) of Nazareth, Israel and Afaf Masri of Damascus, Syria; his sister-in-law, Paula Sutton of Salt Lake City, Utah; brother- in-laws, J.P. Butch Sinclair of Campbellsville, Kentucky, Eddie Sinclair of Summersville, Kentucky, W. C. Bill Sinclair of Bilioxi, Mississippi along with many beloved nieces, great nieces, nephews and great nephews. He was abundantly loved. There will be no visitation or funeral at his request. A private memorial service for family and close friends will be held at a later date. In lieu of flowers, memorial gifts are asked to be directed to St. Anthony’s Hospice, the School of Fine Arts (SoFA) Foundation Endowment Fund through the Community Foundation of Henderson. Arrangements entrusted to Benton-Glunt Funeral Home, A Life Celebration® Home, online condolences may be made at www.bentonglunt.com

The family of Joseph (Joe) Banna created this Life Tributes page to make it easy to share your memories.

Joseph (Joe) Banna, of Henderson, Kentucky passed away on Thursday,...

Send flowers to the Banna family.