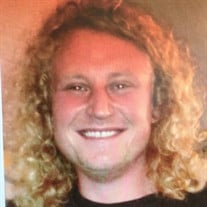 There is no greater gift than parenthood and the good Lord granted my husband Michael and I with just that in the Spring of 1990 when John “Spencer” Addison Meyers entered the world on March 31st and forever changed our lives. We suddenly lost our individual identities and became known as “Spencer’s parents”, and that was fine by us. In the blink of an eye, our towheaded “Angel Boy”, as I called him, sprouted the most gorgeous curls any girl could ask for and a smile that could light up a room. His laughter was infectious and his sense of humor, as his friends would say, could turn a frown upside down. At 4 years old Spencer started playing tee-ball and that began his love of sports. Through the years he played baseball, basketball, football and even tried his hand at tennis but soccer was his favorite. He loved his friends, playing video games, dancing, being silly, music of every genre, spinning poi balls, hanging out by a campfire, being with family and a good ham sandwich. Spencer brought so much joy in our lives and to those that were around him. He had such an energy that those who encountered him will remember him for life. Our Sunshine Boy battled addiction for more than 12 years and helped many friends along the way to recovery. However, his precious life was cut short due to his disease of addiction on September 11th, 2020. He will forever be missed by his father Michael Meyers and myself, Jonna. In addition, aunts; Carla Gibbs, Holly Case (Jim) and Barbara Meyers Shiver all of Henderson, KY, Belinda Kay Parker (Bobby) of Flatwoods, KY and Marcene Freckman of Lewisville, TX, Uncles; David Meyers (Rian) of Port Wentworth, GA, James Meyers of Henderson, KY, Jeffrey Meyers (Tracy) of Madison, AL, Allen Meyers (Nanci) of Fresno, CA, cousins, and friends. Spencer was preceded in death by grandparents; Forest and Louise Meyers, maternal grandparents; John and Fay Gibbs, one uncle; Sam Gibbs and aunts; Connie Johnson and Nancy Richardson. Relatives and friends are invited to Spencer’s Life Celebration from 10:00-11:30 a.m. on Saturday, September 19, 2020 at Benton-Glunt & Tapp Funeral Home, Henderson, KY. A committal service will follow at 12:00 p.m. at Roselawn Memorial Gardens. A memorial service will be held for everyone with Alex Lovell and friends officiating at 6:00 p.m. that evening at Burdette Park (Bishea Shelton), 4301 Nurrenbern Rd, Evansville, IN 47712. Pallbearers will be: Sam Meyers, Taylor White, Tanner Gibbs, John Vanderveer, Alex Lovell, Brandon Lawrence and Honorary: Seth Meyers Memorial Contributions may be made to: Oxford House Hollow, Attention: Will Fox, 514 Center St. Henderson, KY. Due to Gov. Beshear’s mandate, masks are required prior to entry with limited seating per Covid-19 regulations. Arrangements entrusted to Benton-Glunt & Tapp Funeral Home, A Life Celebration Home, online condolences may be made at www.bentongluntandtappfuneralhome.com.

There is no greater gift than parenthood and the good Lord granted my husband Michael and I with just that in the Spring of 1990 when John &#8220;Spencer&#8221; Addison Meyers entered the world on March 31st and forever changed our lives.... View Obituary & Service Information

The family of John Spencer Addison Meyers created this Life Tributes page to make it easy to share your memories.

There is no greater gift than parenthood and the good Lord granted...

Send flowers to the Meyers family.