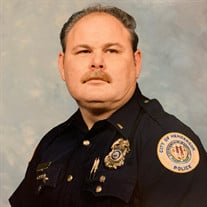 Jerry Wayne Summers, age 72, of Henderson, KY, passed away at 10:40 p.m. on Monday, February 15, 2021 at his home. Jerry was preceded in death by his parents John and Ruby Summers, his siblings: Tommy Summers, George Summers, Jackie Summers, Wilson Summers, and Catherine Gaines, and his son-in-law Robert Jones. Jerry was a police officer for the City of Henderson for over 40 years. He was a resource officer at Henderson County High School for 14 years. Jerry enjoyed hunting, playing cards, and spending time with his grandchildren. He was a member of the Oddfellows Strangers Rest Lodge #13, the Fraternal Oder of Police #009, and the American Legion Worsham Post #40. He is survived by his wife Judy Summers of Henderson, KY; and 3 daughters Dana Jones of Bowling Green, KY, Adrienne Snyder and her husband Nathan of Greenville, KY, and Krystal Powell and her husband Eric of Evansville, IN; and 8 grandchildren: Dylan Jones, Savannah Jones, Samyah, Kara, Camron Snyder, Mason Snyder, Kaden Powell, and Ethan Powell. Relatives and friends are invited to Jerry’s Life Celebration from 2:00 until 5:00 p.m. on Sunday, February 21, 2021 and again on Monday from 9:00 a.m. until service time at Benton-Glunt & Tapp Funeral Home in Henderson, KY. The funeral service will be held at 10:00 a.m. on Monday at the funeral home with Reverend Bill Schwartz officiating. Burial will follow at Roselawn Memorial Gardens in Henderson, KY. Military honors will be rendered by the American Legion Worsham Post #40. Masks are required prior to entry with limited seating per Covid-19 regulations. Expressions of sympathy may take the form of contributions to St. Jude’s Children’s Hospital, 501 St. Jude Place • Memphis, TN 38105 and the National Kidney Foundation, 1001 Craig Rd #480, St. Louis, MO 63146. Arrangements entrusted to Benton-Glunt & Tapp Funeral Home, A Life Celebration® Home, online condolences may be made at www.bentongluntandtappfuneralhome.com

The family of Jerry Wayne Summers created this Life Tributes page to make it easy to share your memories.

Jerry Wayne Summers, age 72, of Henderson, KY, passed away at...

Send flowers to the Summers family.