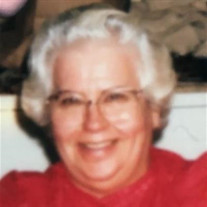 Janie Mae Fambrough Garrett, age 93, formerly of Henderson, KY, passed away at 8:06 p.m., Saturday, February 15, 2020, under the care of St. Anthony’s Hospice and surrounded by the love of her family. Janie was born on October 11, 1926 to Willie and Rosa (Jones) Fambrough. She placed her faith in Christ and was baptized as a young mother attending Calvary Baptist Church in Henderson, KY. After raising her children, she worked several years as a caregiver for home-bound women in the Henderson/Evansville area. She and husband William Harold Garrett also enjoyed fishing until his death in 1984. Her greatest joy was being surrounded by her 9 children, 21 grandchildren, and great-grandchildren. She was also a loving mother and a wonderful cook. Over the years, her home was filled with good food, fun and laughter every weekend. She was definitely the “heart” of the home. In addition to her parents and husband, Janie was preceded in death by her grandson, Joshua Capehart; siblings: Margaret Fambrough, Willa Mae Sawyer, Bill Fambrough, Houston Fambrough, and Frank Fambrough; and sons-in-law Tom Howell and Rex Stephens. Janie is survived by her daughters: Sue Howell, Brenda Stephens, Fay Sisk and her husband Darrell, Rosa Shelton and her husband Tippy, Beverly Kay Gibson and her husband Steve, and Vicki Koonce and her husband Douglas; her sons: Leslie Garrett and his wife Donna, Danny Garrett and his wife Cyndy, and Floyd Garrett; 2 brothers: Ted Fambrough and Jack Fambrough; 21 grandchildren; and a host of great grandchildren, great great grandchildren, nieces and nephews. Relatives and friends are invited to Janie’s Life Celebration from 4:00 until 7:00 p.m. Tuesday and again on Wednesday starting at 9:00 a.m. at Benton-Glunt & Tapp Funeral Home. The funeral service will be held at 11:00 a.m. on Wednesday, February 19, 2020 at the funeral home with Reverend Linda Fambrough officiating. Burial will follow at Roselawn Memorial Gardens in Henderson, KY. Expressions of sympathy may take the form of contributions to St. Anthony’s Hospice, 2410 S. Green St., Henderson, KY or to the charity of your choice. Pallbearers will be her grandsons: Jeremy Garrett, Brian Garrett, Bradley Garrett, Victor Stephens, Doug Koonce, and Jonathan Gibson. Arrangements entrusted to Benton-Glunt & Tapp Funeral Home, A Life Celebration® Home, online condolences may be made at www.bentongluntandtappfuneralhome.com.

The family of Janie Mae Fambrough Garrett created this Life Tributes page to make it easy to share your memories.

Send flowers to the Garrett family.