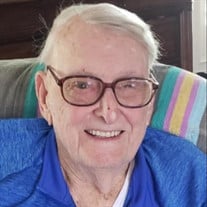 James Golday, age 93, of Evansville, IN, passed away at 3:10 p.m. on Thursday, August 5, 2021 at Deaconess Gateway Hospital in Newburgh, IN. He was preceded in death by his parents John and Irene Golday, wife Anna Marie Golday, son John A. Golday, and his sister Betty Royster. James married his high school sweetheart Anna and together they raised 3 children. Their love for their children instilled the importance of family, love, support, and togetherness. They together, created a legacy of love and leave behind a history and a future of love for their children, grandchildren, and great-grandchildren. James was a member of the Masonic Lodge, Shriners Club, and was a Kentucky Colonel. He was a lifelong member of Bellfield Baptist Church where he served as a deacon for many years. In his younger years, James was an avid bowler and enjoyed water skiing. He was a member of the Henderson Ski Club in the 60’s. He and his companion Faye enjoyed traveling. They had a home in Florida and enjoyed spending the winters there for more than 20 years. He was active in the community and played shuffleboard with friends earning himself a nice row of trophies. James was a carpenter and custom homebuilder. He built numerous homes in the tri-state area. In recent years, he enjoyed watching U.K. basketball, playing rook, and watching Gunsmoke or any western. Most importantly, he was all about family and celebrating every moment with them brought him so much joy. He is survived by his daughters Jo Ann Swanson and her husband Bruce and Tina Nobles and her husband James; grandchildren: Ashley Bailey and her husband Brian, Scott Nobles and his wife Julie, Whitley Southard and her husband Paul, and Neal Nobles and his wife Sara; great-grandchildren: Dylan Nobles and his fiancé Kenzi Crowell, Hudson Nobles, Emarie Nobles, Tate Nobles, Max Nobles, Riley Nobles, Oaklynn Nobles, Kate Bailey, Gunner Southard, Layla Southard, and Sophia Southard; niece Martina Crowley and nephew Troy Royster; and his devoted companion of 30 years Faye Wallenmeyer. Relatives and friends are invited to James’ Life Celebration from 2:00 until 5:00 p.m. on Sunday and again on Monday from 9:00 a.m. until the service time at Benton-Glunt & Tapp Funeral Home. The funeral service will be held at 11:00 a.m. on Monday, August 9, 2021 at the funeral home with Reverend Dan Book and Reverend Rick O’Daniel officiating. Burial will follow at Fairmont Cemetery in Henderson, KY. A Masonic service will be held at 4:30 p.m. on Sunday at the funeral home. Arrangements entrusted to Benton-Glunt & Tapp Funeral Home, A Life Celebration® Home, online condolences may be made at www.bentongluntandtappfuneralhome.com.

James Golday, age 93, of Evansville, IN, passed away at 3:10 p.m. on Thursday, August 5, 2021 at Deaconess Gateway Hospital in Newburgh, IN. He was preceded in death by his parents John and Irene Golday, wife Anna Marie Golday, son John A.... View Obituary & Service Information

The family of James Golday created this Life Tributes page to make it easy to share your memories.

Send flowers to the Golday family.