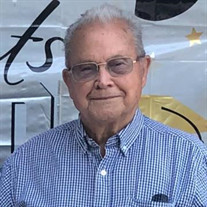 James Edward “Jim Ed” Garrett, age 85, of Henderson, KY, passed away at 12:45 a.m., Thursday, May 14, 2020, at St. Vincent Hospital in Evansville, Indiana. Jim Ed was a member of Geneva Baptist Church. He served his country and was a U.S. Army Veteran of the Korean War. He retired in 1997 from the casting department of Alcan Aluminum Corp. He had several hobbies including being a huge U.K. basketball fan, league bowling, and previous member of the Henderson Men’s Softball Association and Jerusalem Masonic Lodge #9. In addition to his parents, David O. and Pearl N. Garrett, Jim was preceded in death by his wife, Betty Sue Gibson Garrett, sister, Teresa Gower, 2 brothers, Lon Henry and Charlie Garrett, his son-in-law, Kelly Coffman and his son Jeremy Coffman. Jim Ed is survived by his significant other of 10 years Betty Sights of Geneva, KY; 2 daughters: Crystal Coffman of Smith Mills, KY and Sue Hinkle and son-in-law Jeff of Henderson, KY; sons: Eddie Garrett, Jr. and wife Cheryl of Bardstown, KY; Kenny Garrett and wife Lola of Henderson, KY; and Randy Sights and wife Linda of Smith Mills, KY; 3 sisters: Mary G. “Dinky” Fulkerson of Henderson, KY, Marie Nguyen of Lexington, KY, and Ann Hunter of Sanford, FL; 9 grandchildren, 14 great-grandchildren, and all of Betty’s grandchildren and great-grandchildren, he loved them all. Although there are a host of family and friends who wish to gather, due to current restrictions a limited number of 50 people will be in attendance as we open another phase. Relatives and friends are invited to Jim Ed’s Life Celebration from 11:00 a.m. until the service time on Wednesday, May 20, 2020 at Benton-Glunt Funeral Home in Henderson, KY. The funeral service will be held at 2:00 p.m. on Wednesday at the funeral home with Reverend Tim Shockley will officiating. Burial will follow at Roselawn Memorial Gardens in Henderson, KY. Expressions of sympathy may take the form of contributions to Geneva Baptist Church, 7712 Hwy 268, Corydon, KY, 42406. Arrangements entrusted to Benton-Glunt & Tapp Funeral Home, A Life Celebration® Home, online condolences may be made at www.bentongluntandtappfuneralhome.com.

The family of James Edward "Jim Ed" Garrett created this Life Tributes page to make it easy to share your memories.

Send flowers to the Garrett family.