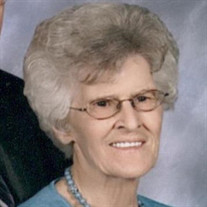 Ida Marie “Bob” Buley Chaney, age 88, of Henderson, KY left this earth for her heavenly home at 2:30 p.m. on Saturday, September 18, 2021. She passed away peacefully with her daughter by her side at Redbanks Skilled Nursing Facility where she received loving care since February, 2020. Ida (later nicknamed Bob) was born to Howard and Nellie Buley on February 12, 1933. On August 27, 1954, she married Reverend Ralph Kenneth Chaney. Her love for him and for the church he pastored was evident in her unwavering commitment to both. She quietly served beside him - often leading the song service and cleaning the church each week, always saying that she was doing it for the Lord. Bob was not as vocal about her faith as Ralph, but it was evident that she loved the Lord and wanted her whole family to know Jesus. Bob loved to work. Upon graduation from high school, she went to work at General Electric in Owensboro where she worked until 1983, at which time she retired so that she could spend more time with her grandchildren. She took care of her grandchildren every weekday until they went to pre-school. She loved to embarrass them by picking them up from pre-school in the diesel Oldsmobile. She had the cleanest house in history and loved to help others clean. She cleaned many dorm rooms and apartments for her daughter and granddaughter over the years and loved every minute. She loved watching sports - especially the Kentucky Wildcats and the St. Louis Cardinals. Shopping was one of her favorite things to do; of course, she was usually buying for others instead of herself. Bob was an incredible cook, famous for her fried chicken, homemade rolls, German chocolate cake, and so much more. Bob loved her family deeply - always putting their needs above her own. Ida “Bob” was preceded in death by her husband, Ralph who left this earth for his heavenly home on January 18, 2017; her parents, Howard and Nellie Buley; 2 small children, Kenneth David Chaney and Alan Wayne Chaney; her sister, Mary Catherine Buley; her brother-in-law, Earl Bugg; her sister-in-law; Jolene Buley; and her nephews, Bryan Buley and Jeff Buley. She is survived by her daughter, Karen Woodard and her husband Doyle of Henderson, KY; her sister, Lillian Bugg of Henderson; her brother, Jim Buley and his companion, Lucy Davis, of Henderson; 2 grandchildren: Stefanie McBride (Grant) of Stockbridge, GA and Preston Bumpus of Henderson; 3 bonus grandchildren: Seth Woodard (Tiffany Smith) of Henderson, Logan Woodard (Mary Donovan) of Arlington, VA, and Carrie McCollom (Royden) of Henderson; and 4 great-grandchildren: Reese McCollom, Leo McCollom, Holden Woodard and Alec Bennett, all of Henderson. Relatives and friends are invited to Bob’s Life Celebration from 4:00 until 8:00 p.m. on Wednesday and on Thursday from 10:00 a.m. until the service time at Benton-Glunt & Tapp Funeral Home. The funeral service will be held at 2:00 p.m. on Thursday, September 23, 2021 at the funeral home with Reverend Jeff Ferguson officiating. Burial will follow at Roselawn Memorial Gardens in Henderson, KY. Pallbearers will be Preston Bumpus, Alex Buley, Spencer Buley, Tim Coomes, Royden McCollom, and Seth Woodard. Honorary pallbearer will be Logan Woodard. Arrangements entrusted to Benton-Glunt & Tapp Funeral Home, A Life Celebration® Home, online condolences may be made at www.bentongluntandtappfuneralhome.com.

Ida Marie &#8220;Bob&#8221; Buley Chaney, age 88, of Henderson, KY left this earth for her heavenly home at 2:30 p.m. on Saturday, September 18, 2021. She passed away peacefully with her daughter by her side at Redbanks Skilled Nursing Facility... View Obituary & Service Information

The family of Ida Marie "Bob" Buley Chaney created this Life Tributes page to make it easy to share your memories.

Send flowers to the Chaney family.