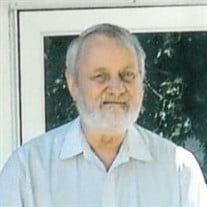 Henry Anthony Goldey, age 77, of Henderson, KY, passed away at 9:18 a.m. Sunday, February 17, 2019 at St. Vincent Hospital in Evansville, IN. Henry graduated from Holy Name High School in 1961. He attended Brescia University. He retired from Pioneer Plastics after 50 years in the tool and die profession. Henry was an active Kentucky Colonel. He was preceded in death by his parents Henry Arthur and Mary Drury Goldey and his brothers Robert Carroll Goldey and his wife Claudia, and William “Bill” Goldey. Henry is survived by his 5 children Ann Goldey of Henderson, KY; Angie Harger and her husband Jeff of Evansville, IN; Anthony Goldey of Henderson, KY; Gary Goldey and his wife Lara of Evansville, IN; Alan Goldey and his wife Freda of Henderson, KY; 1 brother James Denton Goldey and his wife Linda of Concord, CA; 1 sister Jeannine Goldey O’Nan and her husband Ralph of Henderson, KY; several grandchildren, several great grandchildren, and nieces and nephews. Relatives and friends are invited to Henry’s Life Celebration from 5:00 until 8:00 p.m. Thursday and again on Friday from 10:00 until 11:30 a.m. at Benton-Glunt Funeral Home. A prayer service will be held on Thursday evening at 6:00 p.m. at the funeral home. A Mass of Christian Burial will be held at 12:00 p.m. on Friday, February 22, 2019 at Holy Name of Jesus Catholic Church with Father Anthony Shonis officiating. Burial will follow at St. Louis Cemetery in Henderson, KY. Expressions of sympathy may take the form of contributions to Holy Name of Jesus Catholic Church, 511 2nd St, Henderson, KY 42420. Arrangements entrusted to Benton-Glunt Funeral Home, A Life Celebration® Home, online condolences may be made at www.bentonglunt.com

The family of Henry Anthony Goldey created this Life Tributes page to make it easy to share your memories.

Henry Anthony Goldey, age 77, of Henderson, KY, passed away at...

Send flowers to the Goldey family.