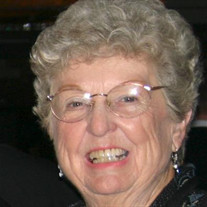 Hazel C. Griffin Endicott, 90, passed away at Tidewell Hospice House in Venice, Florida on December 1, 2021. She was born on June 27, 1931 in Sebree, Kentucky to the late McDonald and Ella Crowley Chandler. Hazel was an avid reader, theater enthusiast and sports fan. She closely followed the UK Wildcats, the Green Bay Packers and more recently the Tampa Bay Bucs every season. She was an excellent bowler who participated in various competitive leagues throughout her lifetime and was also an outstanding shuffleboard player. She was a member of the Venice Shuffleboard Club where she was a 4 time Women's Champion and served on the Board of Directors. She was also a member of the Venice Yacht Club. Hazel was active in the communities where she lived. She volunteered at Meals On Wheels where she delivered meals for many years in both Rockford, IL and Venice, FL. She also served as a Resident Ambassador at the Windsor of Venice assisted living facility where she resided the last four years. Most of all, Hazel was a loving mother and stepmother who shared her excitement and love of life with everyone she met. She will be greatly missed. In addition to her parents, Hazel was preceded in death by her first husband, James E. Griffin and her second husband, C. J. Endicott; four brothers, Eugene Chandler, Starlin Chandler, Ralph Chandler and Eldon Chandler and one sister, Louise Parker. She is survived by her two sons, Michael Griffin (Becky) of Loveland, OH, Gary Griffin (Richard Manera) of Chicago, IL; three step sons, Jeff Endicott (Julie) of Markesan, WI, John Endicott (Patti) of Rochester, MN and Gary Endicott (Jackie) of Sun Prairie, WI; 6 step grandchildren and 6 step great grandchildren. Survivors also include two brothers, John Chandler of Poole, KY and E.C. Chandler of Robards, KY. A graveside service will be held on Saturday, December 18th at 1:00 p.m. at Fairmount Cemetery in Henderson, KY. In lieu of flowers, contributions can be made to Venice Area Mobile Meals, 920 Tamiami Trail South, Venice, FL 34285 or a charity of your choice. Arrangements entrusted to Benton-Glunt & Tapp Funeral Home, A Life Celebration® Home, online condolences may be made at www.bentongluntandtappfuneralhome.com.

Hazel C. Griffin Endicott, 90, passed away at Tidewell Hospice House in Venice, Florida on December 1, 2021. She was born on June 27, 1931 in Sebree, Kentucky to the late McDonald and Ella Crowley Chandler. Hazel was an avid reader, theater... View Obituary & Service Information

The family of Hazel C. Griffin Endicott created this Life Tributes page to make it easy to share your memories.

Send flowers to the Endicott family.