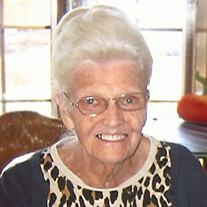 Frances Evelyn Scott-McGrew, age 85, of Xenia, Illinois, passed away Sunday morning, December 29, 2019, at her home. She was born November 22, 1934, in Owensboro, Kentucky, the daughter of Sylvester and Luella (Spears) Whistle. She was united in marriage to Norman A. Scott on September 24, 1949, and they shared 38 wedding anniversaries until his death May 26, 1988. She later married Donald McGrew July 10, 1993, in Beals, Kentucky and they have shared 26 wedding anniversaries together. Frances had worked for Saniclean and Zenith television factory in the past. She worked in housekeeping and as a CNA for Red Banks Nursing Home in Kentucky and for several Flora nursing homes. Frances was a current active member of Faith Holiness Church in Fairfield and had attended Beals Pentecostal Church in Kentucky in the past. She enjoyed cooking, quilting, and working puzzles. She is survived by her husband: Donald McGrew of Xenia; 3 sons: Eugene Scott (Brenda Ralph) of Reed, KY, David (Linda) Scott of Reed, KY, and Brian (Cindy) Scott of Henderson, KY; 9 grandchildren: Winter Scott of Henderson, KY, Selina Damrath of Henderson, KY, Brandon Scott, Bradley Scott, Jason Scott, Brianna Scott of Henderson, KY, Cierra Robinson of Henderson, KY, Melissa Swearer of Henderson, KY, and Bailey Scott of Owensville, IN; 9 great-grandchildren; 1 great-great-grandchild and another on the way; siblings: George Whistle of Chandler, IN, Clara Donahue of Owensboro, KY, and Virginia Clouse of KY; 4 stepchildren: Donna (Bruce) Gansauer of Centralia, Roger (Connie) McGrew of Xenia, Cathy Witsman (fiancé Steven Leathers) of Mt. Carmel, and Brian (Renee) McGrew of Belleville; 13 step-grandchildren; and 10 step-great-grandchildren with twins on the way. She was preceded in death by 2 sons: Marvin and Richard Scott; 1 brother: Billy Whistle; and 1 sister: Helen Dennison. Relatives and friends are invited to Frances’ Life Celebration from 9:00 a.m. until the service time on Thursday, January 2, 2020 at Benton-Glunt Funeral Home. The funeral service will be held at 11:00 a.m. on Thursday with Reverend Barry Skaggs officiating. Burial will follow in Mt. Zion Cemetery in Reed, KY. Arrangements entrusted to Benton-Glunt Funeral Home, A Life Celebration® Home, online condolences may be made at www.bentonglunt.com

Frances Evelyn Scott-McGrew, age 85, of Xenia, Illinois, passed away Sunday morning, December 29, 2019, at her home. She was born November 22, 1934, in Owensboro, Kentucky, the daughter of Sylvester and Luella (Spears) Whistle. She was united... View Obituary & Service Information

The family of Frances Evelyn Scott McGrew created this Life Tributes page to make it easy to share your memories.

Send flowers to the McGrew family.