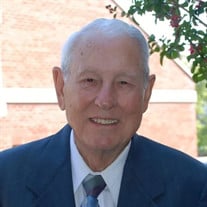 Elijah John Mabry, age 92, of Henderson, KY, passed away at 5:15 a.m., Saturday, December 5, 2020, at Lucy Smith King Care Center under the care of St. Anthony’s Hospice. EJ was a proud United States Army veteran. He was a local business owner and served many in our community to meet their insurance needs. EJ was a monumental force for good in service with the Henderson Shriners Club. He served as a liaison between pediatricians and the Shriners Hospital in Lexington when a child was in need of treatment and he often provided the transportation for the families in need. He was at the helm of the Henderson Shriners Club Christmas Parade on many occasions. EJ was also active with the Henderson Masonic Lodge. Were a traditional visitation possible, A Masonic Service would have been led for EJ. In addition to his parents, Clarence and Effie Mabry, EJ was preceded in death by sisters Agnes Brooks and Inez Bakan, and brothers Edwin Mabry and Carroll Mabry. He is survived by his wife of 68 years Carlotta Mabry; daughter Cindy O’Nan and husband Pat of Henderson, KY; sons Gary Mabry and wife Suzan of Robards, KY and Dale Mabry and wife Meg of Henderson, KY; sister Alice Benson of Sturgis, KY; grandsons: Stephen Mabry and wife Caryn, Mark Mabry and wife Kelly, Sean Mabry and wife Jodi, Ryan O’Nan and wife Lori, Matthew O’Nan and wife Melanie, and Michael O’Nan and wife Rachel; 10 great grandchildren; nieces and nephews. Due to the current restrictions on gatherings, the family’s services will be private. Burial will be at Roselawn Memorial Gardens in Henderson, KY. Military honors will be rendered by the American Legion Worsham Post #40. Expressions of sympathy may take the form of contributions to Shriners Hospitals for Children https://www.shrinershospitalsforchildren.org/shc. Arrangements entrusted to Benton-Glunt & Tapp Funeral Home, A Life Celebration® Home, online condolences may be made at www.bentongluntandtappfuneralhome.com

The family of Elijah John "EJ" Mabry created this Life Tributes page to make it easy to share your memories.

Send flowers to the Mabry family.