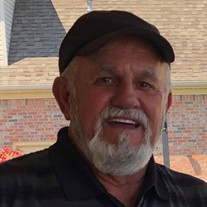 E.G. Gilford, age 71, of Henderson, KY, passed away at 7:49 p.m. on Tuesday, September 21, 2021 at Deaconess Gateway Hospital in Newburgh, IN. He was preceded in death by his parents Charles and Ethyl Gilford; and his siblings: William Ray Gilford, Johnny Gilford, Richard Gilford, Jim Gilford, Emma Witty, Mary Gilford, and Gillie Gilford. E.G. owned and operated Gilford & Sons Roofing for 59 years. He taught his sons an excellent work ethic and the whole family worked together to build the business. He was known for his mutton, and he would BBQ for Kentucky Farm Bureau for many years. E.G. was one of a kind and he loved his family more than life itself. He adored his wife and children; but most of all, his grandchildren had his heart. Pappy made sure they had anything and everything they wanted within his reach. He is survived by his wife of 48 years Sharon Gilford of Henderson, KY; daughter Angela (Ben) Gore of Hopkinsville, KY; sons Clint (Brandy) Gilford and Seth (Molly) Gilford both of Henderson, KY; sisters: Shirley Gilford, Gail Chilton, Jeanie McDaniel, and Barbara Kennedy all of Hopkinsville, KY; 7 grandchildren: Drew (Susan) Ladd, Jordan (Chandler) Ladd, Brooklyn Gilford, Savannah Gilford, Eva Gilford, Xavier Gilford, and Jagger Gilford; 2 great-grandchildren John Dawson Ladd and Foster Ladd; and many nieces and nephews. Relatives and friends are invited to E.G.’s Life Celebration from 11:00 until the service time on Saturday, September 25, 2021 at Cedar Log Faith Christian Church. The funeral service will be held at 2:00 p.m. on Saturday at the church with Reverend Aaron Littrell officiating. Expressions of sympathy may take the form of contributions to Cedar Log Faith Christian Church. Arrangements entrusted to Benton-Glunt & Tapp Funeral Home, A Life Celebration® Home, online condolences may be made at www.bentongluntandtappfuneralhome.com.

E.G. Gilford, age 71, of Henderson, KY, passed away at 7:49 p.m. on Tuesday, September 21, 2021 at Deaconess Gateway Hospital in Newburgh, IN. He was preceded in death by his parents Charles and Ethyl Gilford; and his siblings: William Ray... View Obituary & Service Information

The family of E.G. Gilford created this Life Tributes page to make it easy to share your memories.

Send flowers to the Gilford family.