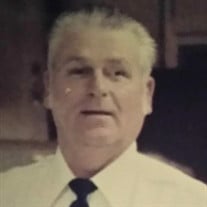 Donald E. Kellough, age 87, of Henderson, KY, passed away at 5:24 p.m. on Monday, August 23, 2021 at his home under the care of St. Anthony’s Hospice. Don was preceded in death by his daughters Brenda Kellough, and Patricia Kellough, and his son Jr. Kellough. Don was employed by the City of Henderson Fire Department for 28 years and retired as the Assistant Fire Chief. He was very active in the Henderson Men’s Fast Pitch Softball League and several surrounding teams for many years. Don actively pitched until the age of 72 years old. He was an avid fisherman, enjoyed being outdoors, and was known for his concrete work. He is survived by his wife of 29 years Judy Kellough of Henderson, KY; 3 daughters April Stewart, Donna Igou, and Pam Kellough; 2 sons Rick Kellough and Eddie Kellough; step-son Reverend Tom Mitchell, and step- daughter Tonya Riley; Judy and Don’s special grandgirls: Anayjah, Kiyla, and Samarah Courtney which they raised from birth, as well as several grandchildren, great-grandchildren, great-great-grandchildren, nieces and nephews, and Randy Norman whom he considered his adopted son. The family would like to especially thank Dr. Joshua Kitchens and staff, St. Anthony’s Hospice. Judy so appreciated April and Lee Stewart and their 3 grandgirls: Anayjah, Kiyla, and Samarah Courtney for the excellent care they extended their Poppi. Relatives and friends are invited to Don’s Life Celebration from 10:00 a.m. until the service time on Monday, August 30, 2021 at Benton-Glunt & Tapp Funeral Home. The funeral service will be held at 2:00 p.m. on Monday at the funeral home with Reverend Randy Norman and Justin Moore officiating. Burial will follow at Roselawn Memorial Gardens in Henderson, KY. Pallbearers will be: Don Farris, Nolan Floyd, David Skaggs, Lee Stewart, Jacob Spurlin, and Christopher Spurlin. In lieu of flowers, expressions of sympathy may be made to St. Anthony’s Hospice, 2410 S. Green Street, Henderson, KY, 42420. Arrangements entrusted to Benton-Glunt & Tapp Funeral Home, A Life Celebration® Home, online condolences may be made at www.bentongluntandtappfuneralhome.com

Donald E. Kellough, age 87, of Henderson, KY, passed away at 5:24 p.m. on Monday, August 23, 2021 at his home under the care of St. Anthony&#8217;s Hospice. Don was preceded in death by his daughters Brenda Kellough, and Patricia Kellough,... View Obituary & Service Information

The family of Donald E. Kellough created this Life Tributes page to make it easy to share your memories.

Send flowers to the Kellough family.